Pre-filed bills are coming in just three weeks away from the beginning of the 2019 General Assembly session in Richmond. On January 9, the one-member Republican majority is set to take on a myriad of important issues like school security, tax reform, gambling, foster care funding, public school infrastructure, among many others.

Here’s a look at a few pieces of GOP legislation on the docket for next year’s 45-day session.

Patroned by Delegate Jason Miyares (R-Virginia Beach, House Bill 1655 would make official the amendment to Article X of the Virginia Constitution, which voters overwhelmingly adopted in November’s election. The bill would authorize the General Assembly to allow localities to provide a partial tax exemption for real property that is subject to recurrent flooding if improvements have been made on the property to address flooding. 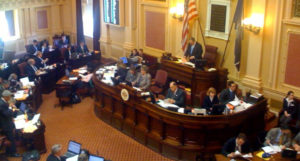 Delegate Lee Ware’s (R-Chesterfield) House Bill 1683, which has been referred to the Commerce and Labor Committee, would allow any electric cooperative to alter its rates without State Corporation Commission (SCC) approval for any of its services. This is being done rather than only for distribution services at any time if such adjustments will not effect a cumulative net increase or decrease in excess of five percent in such rates in a three year period.