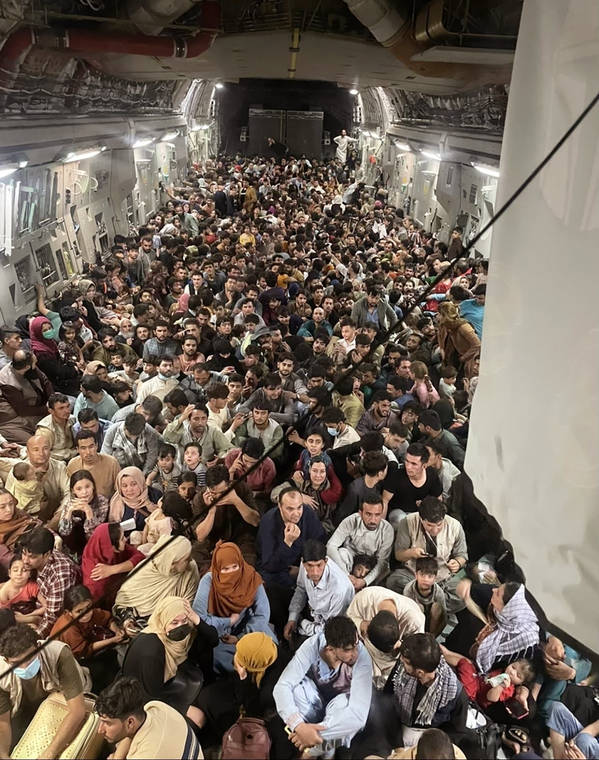 With the omnipresent horror on TV and social media, It’s impossible to not think about Afghanistan these days. Twenty years, thousands of lives, and trillions of dollars were poured into the region, and yet now we’re back to where we started.

Watching the poorly planned and hasty withdrawal of U.S. forces and the ensuing aftermath led me to think about some of the men who made the ultimate sacrifice there.

One of the places U.S. forces have pulled out of is the former Camp Bulldog, later known as Camp Cherry-Beasely. The story of how it came to hold that name is a sad one, but one worth retelling.

I met the men of the 29th Infantry Division, the storied Blue and Gray Division, in Winchester in 2004, when they were first called up for service in Afghanistan. It was the final muster for 3rd Battalion, 116th Infantry before they mounted their vehicles to leave for training — the last step before deployment.

It wasn’t the first time I’d seen soldiers deploy, but it was the first time I’d been old enough to interact with them in a professional way. As a young, green reporter, I wanted to put into words what I was seeing all around me. Tearful goodbyes, hugs and kisses as children and wives bid their husbands and fathers — all infantry “trigger pullers” — farewell.

It was also the first time I had to ask someone an extremely difficult question about their own mortality. These men were going into a war zone, so I asked how they dealt with the possibility that there was a bullet or bomb out there waiting on them.

The answer I got was stoic, and at the same time inspiring.

“You don’t think about that,” one soldier told me. “You think about getting the job done as well as we can, as quickly as we can, so we can come home.”

No one knew it at the time, but two men in that room would not make it home. They would be among the early casualties of the U.S. in Afghanistan. Sgt. Bobby Beasley and Staff Sgt. Craig Cherry were killed when a roadside bomb hit their vehicle while patrolling in southern Ghazni near Gelan.

I was thinking about them, and all the men who gathered in that Winchester armory in 2004 as I watched Kabul fall to the Taliban. The same 7th century bastards who killed Americans. Who rape and torture and behead. Who hold women in such low regard that they’re forced to cover their entire bodies in public.

Monsters so vile that men tried to cling to the landing gear of American cargo aircraft to escape.

What do we say to them when they see images of an abject failure of a withdrawal, the equivalent of America running away with its tail between its legs, as the monsters who took their loved ones roll back into power?

I don’t have an answer for that. I do know that it wasn’t the boots on the ground that failed. It was the politicians in Washington, the REMFs who didn’t tell the truth about what was going on. They’re the ones who failed. Not the trigger pullers of the 29th. They did their job.

I was a kid when I saw the local Guard unit roll out of my hometown for Desert Storm. I stood with my dad along the highway, sullenly waving an American flag. We were scared for them. The memory of Vietnam was not far gone, and the interventions in Grenada and Panama weren’t enough to erase bad memories.

I was old enough to follow the parade down Main Street when they came home. It was a joyous, raucous celebration, as the crowd melted into the parade route behind the column, cheering and shouting the entire way to the local stadium where they were dismissed to be with their families.

That’s what the men and women who served in Afghanistan deserved. A joyous homecoming after a job well done, not images of horror as a disorganized retreat takes on the appearance of a rout.