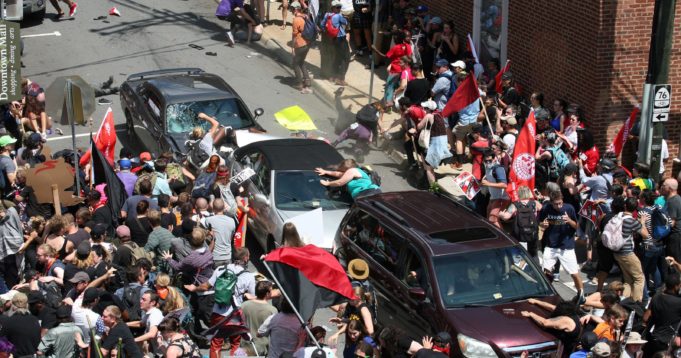 Before this weekend’s protests in Charlottesville, I thought the best way to deal with neo-Nazis and other avowed racists was to shrug and ignore them.

I envisioned the “Unite the Right” gathering as akin to a crowd of toddlers throwing a tantrum together in one giant supermarket aisle, shaking their tiny fists in anger at the refusal of the universe to buy them their favorite kind of cookie.*  Acknowledging their complaining would just result in more complaining later.

however morally necessary it feels to physically confront neo-Nazis, the practical downsides must be considered – along with the benefits of doing things a different way.

It’s hard to be that flippant now, after one of the neo-Nazis involved rammed his car into a crowd of counterprotesters, killing one and injuring many more.  But while I deeply admire the moral imperative that sends counterprotesters into the streets during events like these, I think that letting the racists shout into the void – and confronting them elsewhere instead – is still the better option.

I admit that it doesn’t sound very satisfying.

The rise of the racist right has increasingly polluted a political party that, at its best, eschews the idea of “identity politics” and victimization in favor of an ethos of individual responsibility and hard work.

Those of us Republicans who believe in the latter watched in dismay as xenophobia became an increasingly prominent theme in both the presidential campaign of Donald Trump and the gubernatorial one of Corey Stewart.  It was all of the victimization talk and none of the historical wrongs which at least make it understandable.

So I share the instinct to confront the type of person who marched in Charlottesville this past weekend in a shameless attempt to co-opt “the Right” side of the political spectrum for themselves.  But the goal must be making fewer Nazis – and purging them from the Republican Party – not just punching or scolding the ones we currently have.

I don’t pretend that hewing to this goal is easy.  My belief in it was tested when it became clear that the event in Charlottesville would draw far more neo-Nazis than the hundred or so who had previously appeared in the same park.  The larger a crowd like that is, the more wrong it seems to let them march unopposed.

My belief was tested again after the apparent murder of Heather Heyer.

But however morally necessary it feels to physically confront neo-Nazis, the practical downsides must be considered – along with the benefits of doing things a different way.

First, counterprotesting almost inevitably turns a demonstration into a confrontation.  You give the people you loathe the satisfaction of targeting you both verbally and physically.

The result is an upward spiral of energy that motivates and feeds the “war” narrative of the other side.  Even if nothing as horrific as the car incident had occurred here, there were numerous brawls and a constant stream of objects being thrown at counterprotesters.

Second, it acknowledges the existence of neo-Nazis in a way that doesn’t do anything to minimize or discourage it.  Trying to drain the hatred out of someone is difficult, painstaking work, and it is functionally impossible to do at a protest.  The finest example of this work is the life of Daryl Davis, a remarkable musician who spent years befriending the racists he encountered as he toured the country and convincing them to leave the KKK.

Davis succeeded because he befriended, difficult as that may be to imagine doing.  But nobody is racist because they haven’t heard about how unpopular it is.  They have rationalized being outcasts to the point of enjoying it, and heaping more scorn on them in person is unlikely to change what they believe.

Third, and most importantly, there are much better options.  Not all racists can be reasoned with, and those who attempt to openly spread hatred deserve to be publicly called out for it.  But as counterprotesters took to the streets in Charlottesville, a parallel effort was quickly bearing fruit.

The first steps took place online.  The primary website for white supremacists lost its web host after the march and quickly lost its replacement host as well.  They may have even lost control of the site to hackers before this happened, though that could not be confirmed before the site disappeared.

Individual attendees at the march also lost their jobs and were disowned by their families.  People must take care to avoid cases of mistaken identity, but it is worth remembering that the immediate consequences came not from responding directly (in person or online) but by notifying those who could follow up and hold the marchers accountable.

Not everyone is in a position to respond this way, of course.  There is no substitute for the kind of in-person advocacy that generates feelings of community and catharsis and of just doing something – but it can be done without the downsides of counterprotesting by following two rules: hold your own events, and direct your energy at the enablers, not the foot soldiers.

Fighting racism successfully means striking a particular tone, one that welcomes people (however misguided) instead of simply hating them in return.  Setting that tone means holding your own event, not trying to take over theirs, particularly when the people truly responsible for the current boldness of racists will almost never appear at their marches.

They are the enablers – people such as Steve Bannon, who created a platform for the so-called “alt right” and nurtured their grievances for personal gain.

It is unlikely that racism will ever be eliminated entirely, but individual racists are incapable of wielding meaningful power unless aided by those in positions of authority.  When a company does business with racist organizations or a president repeatedly hesitates to condemn them, that is the time to raise your voice and those are the people who need to hear it.

The recent events in Charlottesville make it clear that racists feel comfortable openly expressing their views in a way which is surprising and concerning.  They purposefully use symbols of past extremists, from torches to Nazi paraphernalia, to invoke a time when they wielded political power and regularly murdered those they disagreed with or felt superior to.