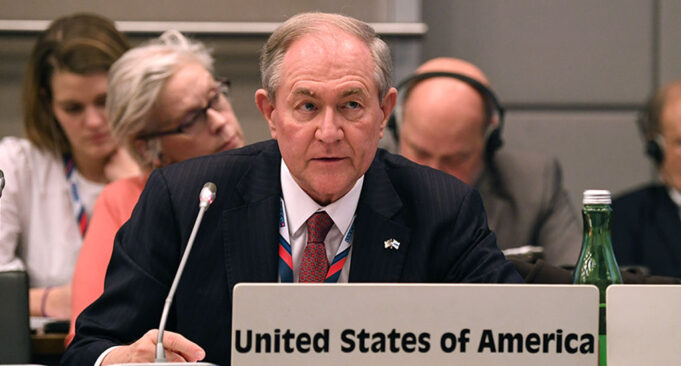 I am grateful for the opportunity to be here today to speak to you and everyone else about my period of time here at the OSCE.  Maria Pia, thank you very much for that very nice and very generous set of comments that you have made.  I am grateful to everyone in the leadership of the OSCE.

I think I should say that this decision perhaps should not have been considered sudden, but it was, in fact, a bit sudden, since we only found out as recently as last night that the office of Ambassador at the U.S. Mission would change.  I regret that, but, at the same time, I think I should state, for the record, that this is not unusual with a change of administration, particularly when there is a change of party in the United States.  So this is a rule that is being applied to all chiefs of mission who are non-career, worldwide, and is certainly not personal to me in any way and should not be seen as such.

One thing I do regret is the lack of opportunity to chair the Forum for Security Cooperation, the chair of which has been handed over to the United States of America.  That was something I was very much looking forward to; we have set the agenda for the FSC, which includes things like the high-level military seminar and frank discussions we were planning with respect to potential conflicts within the OSCE region and the wider world, and other significant issues that I think will add to the security and peace in Europe.  Now while I cannot chair the FSC, you can have confidence in my Deputy Chief of Mission who will be the Chargé d’affaires, Courtney Austrian, who will take on the role of the United States leadership during this interim period until President Biden names a new Ambassador, who is then confirmed by the Senate, as I was.

I want to express my appreciation to the staff at the U.S. Mission.  We have served as a real team in making a contribution to the OSCE.  That includes the excellent staff that is there today, all the way from top to bottom, as well as the staff that has rotated out.  I am very grateful for the warmth, the support, and the professionalism of my team.

Maria Pia has recognized my wife Roxane, who is here.  She has been the major contributor to me in being able to carry out my duties and my work here at OSCE.  She wanted me to be sure  to mention the joy that she has taken in working with CASA, the Circle of Ambassadors’ Spouses in Austria and the relationships she’s been able to build through that organization.  We all know what a wonderful city this is, but it is really wonderful due to the cooperation and friendships we have built here at the OSCE.

I want to recognize and express my appreciation to the Chairpeople in Office who I have had the opportunity to serve under.  I am grateful to the work that Slovakia has done when I first arrived here and the success that they had with their Chairmanship.  I want to recognize Rado, the Permanent Representative from Slovakia, and his Foreign Minister, and the leadership of Slovakia.  I believe that Slovakia had a very successful and significant Chairmanship.

I worked very closely with the leadership from Albania while I have been here.  I have developed a very close personal working relationship and friendship with Igli Hassani, who led this organization so ably through the many challenges that we have seen over this past year.  I have also developed a personal friendship with Foreign Minister Rama.  I believe that Albania’s leadership in the past year has been rather extraordinary, considering the challenges of COVID, the conflicts that have emerged, the pressures within the organization, and without.  I believe these challenges have been successfully faced, particularly by Igli, and I am very grateful for his warmth and friendship.

And finally, we’ve been rather excited about the prospect of the Swedish Chairpersonship.  We can think of no better country to be the chair at this particular point in time and to take over from the very successful Albanian chairmanship than Sweden.  We are very grateful for the opportunity to work with them and already have had a very successful working relationship with Ulrika and the representatives of her country.

I want to say a special thanks to those leaders who stood in when the Big Four were no longer able to serve because of the pressures here within this organization.  Sometimes we forget the people who stand in during the crisis and do such good work.  So we are very grateful to those people who stood in for the Big Four and kept those organizations running so successfully.

Most importantly, I want to express my gratitude and appreciation to all the Ambassadors who are Permanent Representatives to this organization.  At the beginning, we were able to do quite a bit of interaction both diplomatically and personally, and it was quite successful.  I still remember the American Thanksgiving dinner where we were able to bring almost everyone in to my residence for that celebration.  The personal relationships that we have developed here are extraordinary.

I want to say that I believe that the Representatives here are not just simply, as I have heard from time to time, talking and giving statements.  What I have learned here is that the role of diplomacy is very significant in general, and specifically here at an organization such as this one, where 57 countries are here, plus the Mediterranean and Asian partners.  All these countries are able to take official positions and speak out and it is noticed.  The information that we have both informally through the week and then at Thursday’s Permanent Council meetings, come from and are communicated from capitals.  The foreign policy of the 57 countries adjust and react to the work that we do here and the things that we say here.  Because we do not act as independent agents, we act on behalf of our countries.  And knowing that, we make a contribution to the foreign policy of our countries and thereby to the world.

The OSCE stands for principles that were affirmed way back in 1976 and then reaffirmed in the Paris Declaration.  It sets down a framework of the future and what the world should look like in terms of human rights, and dignity, and diplomacy.  That’s what OSCE stands for.  There is no other alternative that has ever been offered that is superior to the principles that are adhered to and furthered by this organization, and therefore this organization has an essential worth and an essential future.

This organization is central and essential to peace, not just within the OSCE regions, but across the entire world.  As history has shown us, when peace and security breaks down in Europe, then the consequences are worldwide.  We have seen it.  We have all noticed it.  We understand it.  It is part of the reason why this organization exists.  There is no other organization that is able to provide this level of cooperation, security, peace, and opportunity across the OSCE region.  There is no other organization that can do that.  There are others that are perhaps better known and better recognized; they have their own individual goals and missions.  But only the OSCE provides a forum for all the countries and states to come together, whether they have disagreements and disputes or if they already work together in cooperation and friendship.  It is the only one that provides that forum.

It has been my privilege to represent the United States here at the OSCE.  I am grateful to President Trump for offering me the opportunity to make this contribution.

Jim Gilmore serves as the ambassador to the Organization for Security and Cooperation in Europe (OCSE) and served as the 68th governor of the Commonwealth of Virginia.