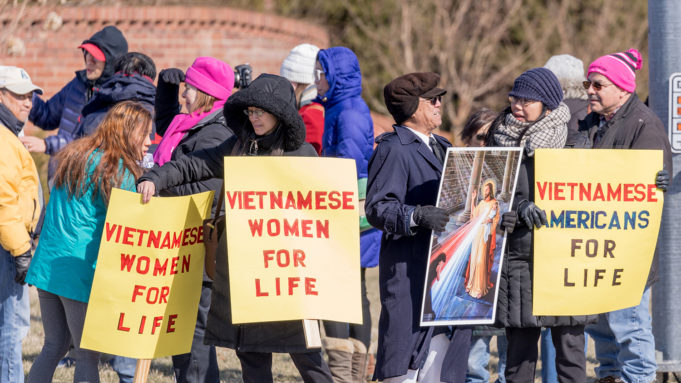 Are there cracks forming in the blue wall of support for a controversial late-term abortion bill?

In comments posted to her campaign Facebook page last week, Democrat Martha Mugler said she would not have supported House Bill 2491, brought forward by Del. Kathy Tran in late January.

“I would have not have supported Virginia House Bill 2491,” said Democrat Martha Mugler, a member of the Hampton School Board running for her party’s nomination in the 91st District.

Answering questions on her campaign Facebook page, Mugler became only the second Democratic candidate for the House of Delegates to publicly distance themselves from the legislation.

The bill — and Democratic support for it — created a public outcry after Tran, answering questions from House Majority Leader Todd Gilbert, said her bill would allow abortion at 40-weeks, up to the moment of birth.

“My bill would allow that, yes,” Tran said.

“These decisions are personal and private, and they are made in consultation with doctors who are using their best medical judgment,” Tran told the Richmond Times-Dispatch not long after the hearing.”

“I regret that these partisan games have taken the focus away from where it should be: on the Virginian women who have asked for this bill to get politicians out of their private medical decisions,” she said.

She later backtracked on the impact of her bill, saying in a video on social media that her bill would not change the standards for late term abortion. Politifact later found that statement to be false.

Democrats, including Minority Leader Eileen Filler-Corn, have said they intend to make Tran’s bill a part of their election platform headed into November.

“There’s a lot of support for this type of legislation,” she told reporters in January.

Mulger is the second Democrat to publicly back away from the Tran bill.

Del. Dawn Adams, R-Richmond, told constituents in January that “she did not exercise due diligence” on the Tran bill.

“Had I researched each line of removed language, I would have seen that, and known that there was more research to be done,” she said.

“None of this changes that I believe women must have safe legal options for abortion; but I also would have seen the utility of language that provides guidelines for how to ensure this.”

Mugler is challenged by Democrat Mike Wade for the party’s nomination. The winner of the June 11th primary will go on to face Republican Colleen Holmes Holcomb in November.