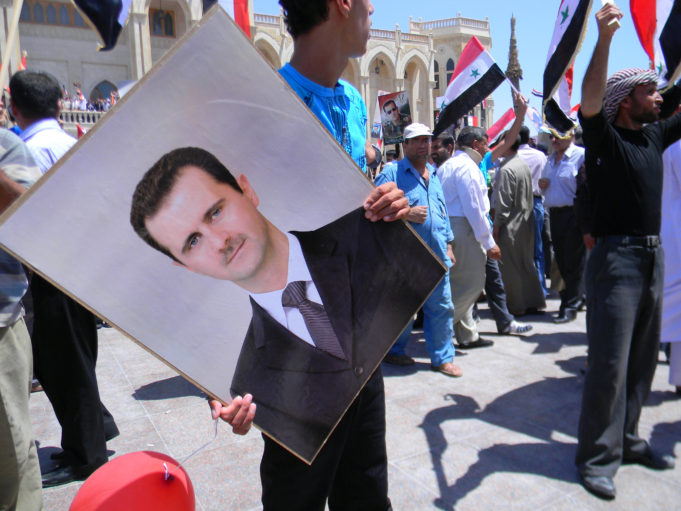 Even though tension is at an all-time high between both political parties in Washington, Republican and Democrats actually do agree on one thing – America must go to war in Syria immediately; Assad must be overthrown.

Over the weekend, a suspected chemical attack in Douma, a suburb of the captial city Damascus left at least 40 people dead in the southern, rebel-held city, according to aid groups in a report from PBS. The U.N. Security Council held an emergency meeting on Monday, and President Donald Trump said “major decisions” on Syria would come within 24 to 48 hours and says, “nothing is off the table.”

“I’d like to begin by condemning the heinous attack on innocent Syrians with banned chemical weapons,” Trump said after he was notified of the attack. “It was an atrocious attack, it was horrible. You don’t see things like that as bad as the news is around the world, you just don’t see those images,” he added according to a report from CNN.

Trump took to twitter yesterday morning and said, “President Putin, Russia and Iran are responsible for backing Animal Assad,” and that there was going to be a “big price to pay.”

According to a statement from Syrian President Bashar al-Assad’s government, “the army, which is advancing rapidly and with determination, does not need to use any kind of chemical agents.”

Furthermore, Russian Foreign Minister Sergei Lavrov said following the incident that no evidence was found of a chemical attack. He also alleged a “provocation” had been prepared to blame the Syrian regime for an attack.

Today, Senator Lindsey Graham (R-SC) is calling for “massive attacks” against the regime. Howard Dean, the former head of the DNC who also ran for president, is going even further, calling President Trump a “wimp” on Twitter for merely sending “thousands” of military troops and lobbing bombs at the war-torn country. For Dean, even thoughhe used to be dubbed the “peace candidate,” total war is the only option.

“Trump has to take action,” everyone cries – all media pundits and lawmakers agree. Of course, what would Obama do?

Fox’s Tucker Carlson sees this a different way. On his “Tucker Carlson Tonight” prime time show, he said, “universal bipartisan agreement on anything is usually the first sign that something deeply unwise is about to happen.”

“We should be skeptical about this – starting with the poison gas attack itself,” he explained.

First, where is the evidence that Assad launched the chemical attack, resulting in the deaths of all the children, he asks.

Well, of course no one knows. In such an embattled nation it is basically impossible to have proper correspondence on the ground outside of an intense military operation.

At face value, it wouldn’t – Assad is winning the war without them.

As well, the Trump Administration recently announced the soon-to-be-dated withdrawal of troops from Syria as ISIS has been decimated and is on a hard retreat. Thus, good news for Assad.

The only thing Assad could possibly do to prolong U.S. involvement in the civil war would be to gas his own people. Yes, Assad may be evil, but stupid, probably not.

Moreover, this is the same exact story that unfolded last April, the story that led with the Trump Administration no longer seeking to depose Assad. President Trump did not wish to pursue regime change in Syria.

Afterwards, both parties cried foul and then the news came out that Sarin gas was used on the village of Khan Shaykhun, killing over 70 civilians, just one day before a conference in Brussels on options to be taken on the Syrian civil war.

In response, President Trump launched one of the largest bombing raids in years on the country with 59 tomahawk cruise missiles.

With all that, the current chemical attack, in Carlson’s mind, seems “weirdly timed” and “counter-productive to him [Assad].”

Two months ago, Secretary of Defense Jim Mattis announced that the U.S. is still unsure if Assad used chemical weapons against his own people due to lack of evidence. Although people on the ground and subsequent videos of the attack show the effects of gas being used, it is still unclear on who launched the attack.

For argument sake, Assad did it – he gassed his own people. So, what would happen next?

The U.S., not her allies, but the U.S. alone would wage a new war, a new regime-toppling campaign against an additional Middle Eastern nation that would result in tens or hundreds of thousands of civilian casualties, the lives of American servicemen and women, and hundreds of billions of dollars.

Before he was elected president, Donald Trump spoke out against regime change, claiming that the Arab League should become involved. They have more skin in the game anyways.

As well, what exactly happened the last time the U.S. went in and toppled a country? Whether it be Libya or Iraq within the last 15 years, are the results not absolutely dreadful?

If the U.S. wishes to continue to vie for regime change in Syria or anywhere else in the world, whichever administration is in the White House should be tasked with building back up the government of the nation in which it previously toppled before going on to the next one.

American foreign policy should not be run by “talk show generals” with open-source intelligence taken off of YouTube.

In the end, Assad knows all this – he is most likely an evil man, but not a stupid one.

It is unclear who benefits from this, but it is certainly not the U.S.