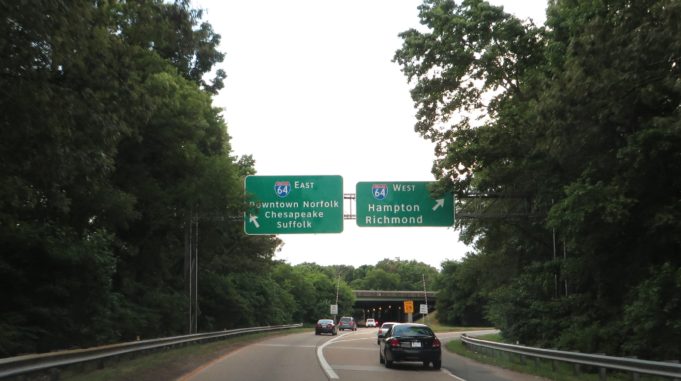 Many may think that it is counterintuitive to raise speed limits to improve safety on Virginia’s roadways. However, state transportation officials have announced that is exactly what they will do.

No, they will not be raised above the 85 mile-per-hour mark that is commonly seen in the right lane on Interstate-95 – the Commonwealth’s Autobahn in various areas, and a complete parking lot in others. Nevertheless, a 9.5-mile stretch of Interstate-64 in Hampton Roads will now see break-neck speeds of 65 miles per hour starting Wednesday night.

“New speed limit signs will be posted on I-64 east and west in the cities of Hampton and Newport News,” a Virginia Department of Transportation (VDOT) spokesperson said, according to a report from WTVR. “The speed limit is being raised from 60 mph to 65 mph…from Jefferson Avenue to just east of Hampton Roads Center Parkway.”

The decision to raise the speed limit was made after VDOT conducted a traffic study which reviewed existing traffic conditions and crash data along that stretch of interstate. VDOT believes that increasing the speed limit would improve safety in that area. Coming from VDOT, of course, a lot of skepticism arises.

However, there is science behind this.

There is a general logic to how speed limits are applied on roadways, which begins with classification.

Wider, arterial roads, which also have less access points to oncoming traffic have the highest, or higher, speeds – like I-95. Vice versa, secondary and local routes, which are, for the most part, more narrow and have many more access points, have lower speeds – like neighborhood streets. Thereby, the maximum speed allowed on a road is inversely proportionate to the amount of access points.

Furthermore, the general construction of the road and location becomes part of the equation.

Roadways in built up areas like cities and town centers have lower speeds because of a concentration of hazards – pedestrians, parked cars, hot dog stands, and other potential unknown motoring variables. Consequently, sparsely populated areas with less things to smash a car into have higher speeds.

Roads in rural areas are curvy with quick vertical and lateral alterations in the direction of travel. Highways have more gradual increases and decreases in hills and are fairly straight. In fact, many believe that former President Dwight Eisenhower made sure during the federally-back highway expansion of the latter half of the 20th Century that highways were to be constructed to double as runways. Not surprising from the military mind of the former five-star general of the United States Army and Supreme Allied Commander.

However, the “one-in-five rule” has actually been debunked, according to the Federal Highway Administration’s Research and Technology Division within the U.S. Department of Transportation:

Some references to the one-out-of-five “law” attribute it to the Federal-Aid Highway Act of 1956. The 1956 act launched the Interstate Highway Program by creating the Highway Trust Fund as a funding mechanism and by committing the federal government to build what became the 42,800-mile (68,880-kilometer) Eisenhower Interstate Highway System (now essentially complete).

President Dwight D. Eisenhower fully supported the Interstate Highway System as vital to our economy, safety, relief of congestion, and defense. However, he didn’t propose a one-out-of-five-mile rule, and Congress didn’t include such a requirement in the 1956 Act. The one-out-of-five rule was not part of any later legislation either.”

Regardless, roads with more intersections, natural and artificial hazards, and an increased amount of changes and the rate of both lateral and vertical directional changes equals a lower required speed.

There is no guarantee that a speed limit will have any effect a driver’s behavior on the road. For most, when driving, people choose a speed in which they personally feel both comfortable and safe. Meanwhile, as automotive technology evolves, cars are safer at higher speeds, and then the inclination for drivers to drive faster on highways also increases.

Even though one may believe that a state-mandated speed limit sign should not dictate speed, what it should do is reflect the average behavior of drivers on the road. Specifically, as the engineering firm SEH explains, how fast 85 percent of drivers are traveling.

The speed at which 85 percent of motorists travel is called “prevailing speed,” which they point out is the safest, regardless of the posted speed limit.

“Imagine a car moving dangerously slow in the left lane, or a car weaving through traffic at extremely high speeds. These vehicles are unpredictable and dangerous. This is not solely due to their speed, because fast and slow are relative, but because of their speed in relation to other drivers,” they explained.

Therefore, safety decreases significantly as drivers deviate from the prevailing speed, and speed limits are increased to help decrease unsafe speed variations among the fastest and slowest drivers.

The five mile-per-hour increase in Hampton Roads also follows the implementation of Virginia’s “Slowpoke Law,” which has produced decent results since its inception on July 1, 2017. A broader portion of the law fines drivers if they are travelling slower than the normal speed of traffic in anything but the right lane except when passing or preparing to turn left.

The law also includes violations for big-rig trucks failing to stay in the right lane in designated areas, crossing a double-yellow line, unsafe lane changes, or changing lanes in certain areas where that is prohibited. At least 14,815 people were cited within a 10-month time span that carried the $100 fine.