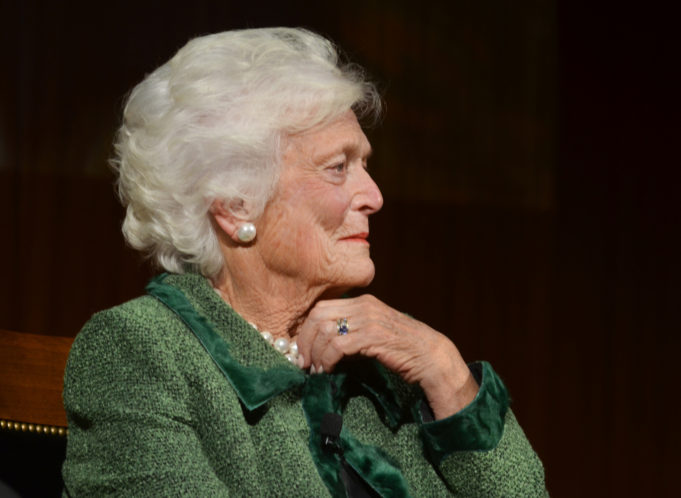 On Tuesday night, April 17, 2018, former First Lady Barbara Bush passed away at the age of 92 alongside her husband, former President George H. W. Bush at their home in Houston, Texas.

She is remembered as a staunch advocate for literacy in America going back to her work in the late 1980s as First Lady of the United States. She called her work in impoving family literacy in the U.S., “the most important issue we have.”

She continued to be dedicated to eliminating the generational cycle of illiteracy after her time in the White House by creating the Barbara Bush Foundation for Family Literacy.

In a report from NBC News, James Baker, secretary of state and White House chief of staff during the George H.W. Bush Administration, said the former First Lady was, “a passionate voice for volunteerism and the view that everyone should believe in something larger than self.”

“Barbara Bush challenged each of us to build a better world by empowering people through literacy,” Baker said.

The American matriarch also has close political and family ties to Virginia. During her husband’s campaigns for and service as both vice president and president, she made countless trips to the Commonwealth to promote charitable causes, especially for improving literacy rates and stressing the importance of reading.

Bush often said illiteracy was, “the largest curable disease in our country.” She also explained that nearly one in five Americans, “can’t read well enough to contribute as a citizen.”

In 1985, as Second Lady of the United States, Bush visited Falling Creek Elementary School in Chesterfield County and spoke to 600 students about the importance of reading. During her visit she read to second-graders from a rocking chair as they listened quietly to stories told from books in the library.

In January of the following year, Bush spoke at the Women’s Club in Richmond, where she urged attendees to counteract illiteracy in American by volunteering, tutoring, and donating money to local libraries. She also called on politicians to make literacy programs a legislative priority.

According to the Richmond Times-Dispatch, Marvin Bush graduated from Madison County prep school Woodberry Forest and then went on to study and graduate from the University of Virginia (UVA). In 1981, he married St. Catherine’s School and UVA alumnus Margaret Conway Molster of Richmond.

Jenna Bush Hager is married to Henry Hager, a Richmonder who graduated from St. Christopher’s School and UVA, who is also the son of former Virginia Lieutenant Governor John Hager.

Following her death, John Hager opined on his son’s mother-in-law by saying the former First Lady, “was a marvelous woman – she was a real matriarch in every sense of the word.”

“She was real friendly to us and could not have been a better hostess…She was always very gracious to us” John Hager said.

“I think they liked Henry and that was the end of it. They’ve been great to us ever since,” he said.

Speaker of the Virginia House of Delegates Kirk Cox (R-Colonial Heights) took to Twitter to give his remarks to the recently passed former First Lady. “Julie and I join the nation in mourning the passing of Barbara Bush while celebrating her life. Her legacy lives on through her advocacy for literacy and volunteerism in America.”