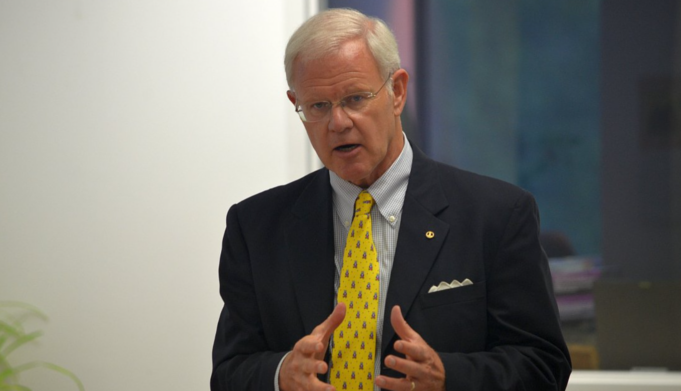 “Snyder is a man of achievement and known conservative principle, who knows how to win this election.”

Breaking news from Richmond as Delegate Lee Ware (R-Powhatan) — known to friends as the “conservative conscience of the House of Delegates” has endorsed Pete Snyder‘s campaign for governor.

Ware’s endorsement is notable for two reasons; not only is it a paradigm shift from the House Republicans who traditionally back one another, but Ware is seen by both sides of the aisle as a man of principle, integrity, and conservative principle.

Nor is Ware’s endorsement lightly given, as Ware tends to hold his firepower for moments of tremendous import.

“I am pleased to endorse Pete Snyder for Governor. Pete is a man of achievement and known conservative principle, who knows how to win this election,” said Delegate Lee Ware (R – Powhatan).

Naturally, the Snyder campaign is elated to the point of effusion over the imprimatur of the gentleman from Powhatan:

“I am proud to have Delegate Ware’s endorsement. He has been a thoughtful, conservative leader in Richmond and as a lifelong educator and former member of the Virginia State Board of Education, he knows how important our fight is to open our schools. We are truly blessed to have him on the team as we continue our fight against the liberal national teachers unions so we can open schools five days a week with a teacher in every classroom.”

Snyder’s collection of center-right endorsements have ranged from intellectual powerhouse and Heritage Foundation president Kay Coles James to conservative crusader Ken Cuccinelli.  Given Snyder’s pro-small businesses background and renewed focus on localism and local solutions, Ware’s endorsement solidifies a trifecta conservative endorsements that are surprising in some ways, but similar in many others.

More notable in the Ware endorsement is that — for those who know Ware — it is given in perfect friendship with a focus on integrity in the public square.

Ware’s previous chairmanship of House Finance Committee also signals that Snyder will be taking direction from longstanding conservative pragmatists who are eyeing a Republican majority in the House of Delegates this year — surely one of many checkboxes the Virginia business community (particularly in Richmond) want to see.

Pete Snyder is one of eight candidates running for the Virginia GOP gubernatorial nod.

EDITORIAL NOTE:  Delegate Lee Ware (HOD65 — Powhatan) is the sitting delegate of a member of the editorial board of TRS.