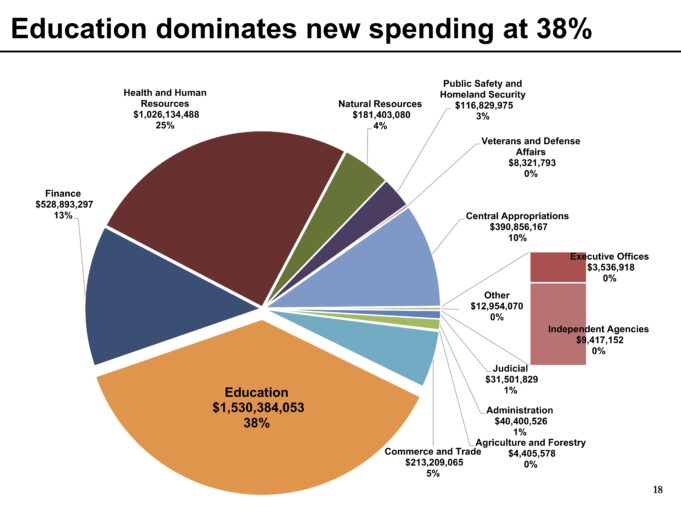 The ink on Governor Ralph Northam’s only full two-year budget isn’t even dry, and there’s already a war brewing among Democratic interest groups.

Rolled out to much fanfare on Tuesday, the budget plan includes just over $390 million in new spending for K-12 education and over $700 million for to fight climate change. Neither of those sums are chump change, but education advocates are crying foul.

Schools — specifically teachers — got the shaft, they argue, since the biennial “re-benchmarking” of state aid to schools was going to cost over $800 million. That funding was largely baked in to estimates of the Governor’s budget.

Beyond that, the Virginia Board of Education called for an additional $950 million annually to meet new Standards of Quality. The SOQ are constitutionally required rules prescribed by the BOE. The General Assembly them has to codify those rules into the Code of Virginia for enforcement.

But when the Governor rolled out his budget on Tuesday, out of the requested $950 million only $400 million was in its place. Teacher group Virginia Educators United was furious.

“… This budget does not include full funding for the Standards of Quality set by the Virginia Board o fEducation. These standards are established to articulate the bare minimums needed to consider our schools adequate. We cannot applaud any budget that does not fund these standards.”

Meanwhile, environmental programs saw an additional $770 million in funding. Environmental groups, coincidentally, donated more than $1 million in the Democratic effort to take the General Assembly — roughly 10 times what came in from education interests.

Groups were also grumbling that Northam allocated $200 million for the legislature with no strings attached — a significant amount even in a massive state budget that could have been used to push teacher salaries higher toward the national average.

Republicans pledged to raise pay to that level over four years during the 2019 campaign, but came up short and lost control of both the House and the Senate.

The conflict sets up a showdown on the left, potentially the first of many, as Democrats sort out which interest groups get first call on the state’s coffers.

It doesn’t help that two major sources of funding from Northam’s budget are regressive taxes — cigarette and gas taxes. New taxes on “games of skill” that are sweeping Virginia are also included. Commonwealth institute called them QUOTE>

With Democrats in complete charge of the state, Republicans can only sit back and watch. And eat popcorn, as the liberal coalition begins its long-anticipated circular firing squad.