On Europe’s battle-scarred Western Front during the early years of World War I, simply known as “The Great War” to citizens over 100 years ago, what was said to have occurred on or around Christmas Day was something that hearkened back to the times of Medieval chivalry and a mutual respect for soldiers fighting against one another in battle. It was a fleeting, but landmark instance that cut through political affiliations and patriotic duties to the bare bones of human emotion in one of the worst wars society has ever seen.

Most accounts claim that the Christmas Truce of 1914 was started by the Germans – whose clocks would have indicated it was Christmas back home one hour earlier than the British or French – but the deafening sounds of gunfire zipping through the air transformed into laughter and music that was aided by all who were fighting in the muddy fields of Allied Europe. According to some reports, it has been said that the peacetime was instigated from just a single German voice cutting the silence in northern France with the line: “You no shoot, we no shoot.”

Nevertheless, in the week leading up to December 25, French, British, and German soldiers climbed out of their trenches into “No Man’s Land,” first to retrieve the bodies of fallen soldiers, but what also turned into exchanging seasonal greetings. This expanded into soldiers, who were shooting at one another just hours beforehand, exchanging food and souvenirs with the opposing sides. Notably, there was also games of soccer being played with and against one another – British, French, and German soldiers together in unison. 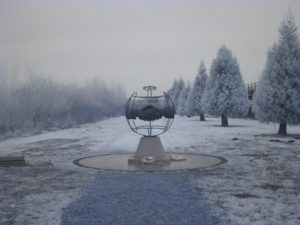 In 2008, a Christmas Truce memorial was unveiled in Frelinghien, France, at the location where, on Christmas Day 1914, the games were played between the Allied and Axis Powers.

Although the entirety of the fighting throughout continental Europe did not cease during the Christmas Truce, it was one of the last examples of the then-outdated notion of chivalry between enemies in warfare. A temporary Christmas holiday truce was never repeated – attempts in later years were halted by military officers who threatened punitive and disciplinary measures on soldiers who dared to engage in peaceful activity with a sworn enemy.

Regardless, it served as heartening proof, albeit brief, that beneath the brutality of warfare, the humanity embodied in a soldier endured even through hell on Earth.