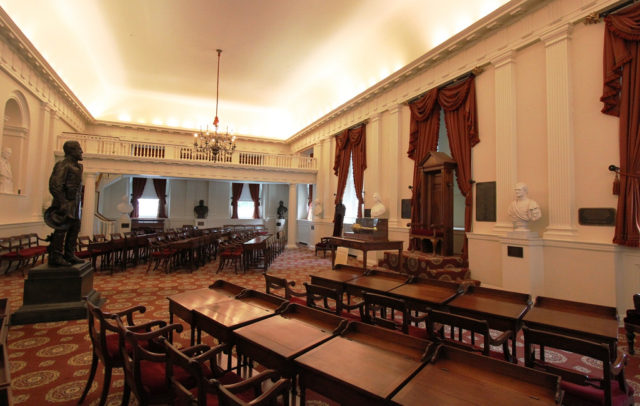 As the 2018 Session of Virginia’s General Assembly convened today at noon, the dust is settling from the blue wave that engulfed Virginia politics as the Republicans lost 15 seats in the House of Delegates, going from a 66-34 majority to just a 51-49 split. This comes after incumbent Republican Del. David Yancey (R-Newport News) became victorious over Democrat challenger Shelley Simonds after a tie breaker on January 5th had his name being pulled out of a bowl to decide who would lead the 94th District. As a split House in Virginia is not common occurrence, the notion of power sharing may arise in the coming weeks, something that has an uncommon history in the commonwealth.

Del. Kirk Cox (R-Colonial Heights) was voted in by majority Republicans as well as every single Democrat in a 98-0 vote as the next Speaker of the House. He will now lead the Republican Party to decide the future of passage on issues that will be highlighted in the 2018 Session. Policies that are to come forward are Medicaid expansion, student loan debt, universal background checks on gun purchases, and absentee voting. Considering most of these issues would not have had the majority support necessary to pass through a “mostly red” House of Delegates, they could have a new life in a near-split General Assembly this year. Democrat Governor-elect Ralph Northam spoke of the legislative package he and current Governor Terry McAuliffe announced, according to the Richmond Times-Dispatch:

“It is nonpartisan. It is common sense. It’s something I think that will have support from both sides of the aisle. And these are issues that we ran on in 2017. And as you all know, on the 7th of November, Virginia spoke.”

With such a minute majority the Republicans have in the House of Delegates and an all-Democrat executive leadership, policy dealing in the General Assembly may move forward with a notion called “power sharing.” For the non-politicos following the 2018 Session, there are absolutely no rules in power sharing.

In Virginia, House rules are designed to make it rather easy for the majority party to direct House business for the 60-day session. Unlike the tie-breaking vote by the incoming Lieutenant Governor Democrat Justin Fairfax has in the Senate, there is no procedure for the same scenario in the House. Therefore, if there is a 50-50 tie, or any type of tie vote, a measure fails. However, there is only one vote the House must make that is not allowed end in a tie: the vote to elect a Speaker of the House. This means the two political parties will need to negotiate on the floor to ensure that the House chooses a speaker to lead the General Assembly’s agenda.

Moving forward, the Speaker of the House has 300-400 jobs to fill for the subcommittees on agriculture, transportation, justice, science and technology, police and public safety, and so on. Newly-elected Speaker of the House Cox, considering he is a Republican, can staff the committees that bias them towards the conservative side. Though, Virginia Republicans are not a homogeneous entity. There are the centrists, Trumpists, followers of Corey Stewart, Tea Party supporters, and a few others that draw lines between themselves on issues ranging from the Second Amendment to the ABC’s involvement in state-run alcohol sales.

The split in the House emulates what happened in the mid-20th century in the lower chamber that led to the edification of commonwealth politics by 52-year Virginia politician, Del. Lacey Putney from the 19th District. When Putney was elected to the House in 1962, Virginia politics was enduring the height of the Byrd Organization. This was a vast political machine crafted and led by former Democratic Governor and United States Senator Harry Flood Byrd that reigned supreme from the mid-1920s until the end of the 1960s. The Byrd Organization effectively controlled the political workings of the commonwealth through a network of judicial sympathizers and a swath of local constitutional officers in most Virginia counties. Their main aim was to oppose federal laws regarding desegregation, among others.

When Putney was appointed to the House Appropriations Committee in 1966, the state budget of Virginia was drafted in a locked room by an “executive committee” of five senior legislators and the state budget director. Putney and other junior committee members who were to sit for the drafting of budget were excluded from the deliberations. This led to the historic path the delegate would eventually take the next year.

Putney, originally a Democrat, left the party and became an independent in 1967, refusing to sign a loyalty oath committing him to support the Democrat party’s candidates in all state  and federal elections. When Putney announced his decision to run as an independent, bucking the Democrat machine, The Roanoke Times reported that he issued a statement denouncing the loyalty oath as an effort to, “force conservative officeholders to forsake their convictions, bow to the Democratic party, and support anyone who chooses to call himself a Democrat, even if it means supporting socialism, communism or the welfare state of the Great Society.” Decades later, Putney would join the House Republican Caucus in 1998 for organizational reasons. The move created a 50-50 split in the House and forced Democrats into a power sharing agreement that included partisan parity on committees.

Therefore, with such a divide in the House, the Republicans, or even the Democrats, could move to create informal consultation mechanisms to push forth an agenda. This could mean for every Republican-sponsored bill that hits the House floor, a Democratic-minded one has to match it for things to move smoothly. Likewise, it could mean staffing committees that are split down the political middle to kick off the intricacies of power sharing. Again, in the House, there are no rules.

There are some newly-elected members of the Democrat Party in Virginia that are acclaimed members of the anti-Trump resistance movement, many of whom are looking to pick a fight. Though, their party leaders many be leaning towards incrementalism and compromise to ensure a well-running body of government set to benefit the citizens of the commonwealth. So, will the new delegates line up behind their establishment leadership, or will the more politically savvy hands move to push for big Democratic ideals like the expansion of Medicaid coverage?

The “Virginia Way” may come up during the session, as reported by RVA Magazine. This “mythology” supports civility in the political spectrum in a world that has been hijacked by ruinous party agendas seen in mainstream media. This dignity and integrity-driven way of going about politics is a notion which some say is indicative of a nearly 400 year-old body of legislation, where power sharing has its origin. While anything can happen within the next 60-days, considering Del. Cox was elected to Speaker of the House with a 98-0 majority after having his nomination seconded by a member of the Black Caucus, one could make the assertion that House Republicans will run a clear agenda.