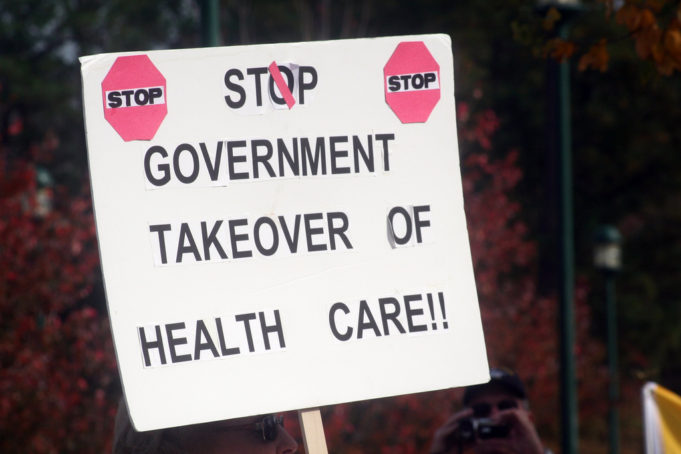 On December 14 – the eve of the sign-up deadline for next year’s insurance policy period on the healthcare marketplace – a conservative Texas federal judge ruled parts of the Obama-era Affordable Care Act (ACA) “invalid.” However, several blue-state attorneys general are lining up to petition the decision in the lower appellate courts.

U.S. District Judge Reed O’Connor ruled in Texas v. U.S. (2018) that the Tax Cut and Jobs Act signed into law in December 2017 removed the “constitutional foundation” on which “Obamacare” stood. He explained that the measure thereby eliminated a penalty for not having coverage under the federal healthcare overhaul of the early 2010’s. The penalty paid to the Internal Revenue Service (IRS) by those when taxes are due is “therefore invalid” as it cannot be separated from the rest of the law, the judge explained in his 55-page opinion.

Appointed by President Bush in 2007, Judge O’Connor has also issued preliminary injunctions and rulings against separate parts of ACA in the past, including under Title XI civil rights law and the Religious Freedom Restoration Act.

California Attorney General Xavier Becerra, one of the legal authorities against the peeling away of the ACA, said on Twitter that the “misguided ruling in Texas v. US will not deter us: our coalition will continue to fight in court for the health and wellbeing of all Americans.” Joined by a contingent of 16 attorneys general, the opposition seeks to fight against any judicial or legislative decision that “imperils health care coverage and funding for all Americans, particularly more vulnerable groups like seniors, children, and people with chronic medical conditions or disabilities,” according to a California Department of Justice press release.

With appeals certain in the near future, the White House said the law will remain in place for now. Even if the entire health law is invalidated, popular provisions that benefit Medicare beneficiaries and people with employer coverage would also be scrapped, including the section that allows parents to keep young adult children on their coverage until age 26.

Regardless, the Trump Administration was happy with the decision by the lower court.

“Wow, but not surprisingly, ObamaCare was just ruled UNCONSTITUTIONAL by a highly respected judge in Texas. Great news for America!…Now Congress must pass a STRONG law that provides GREAT healthcare and protects pre-existing conditions. Mitch and Nancy, get it done!”

Congress is highly unlikely to act on the next proposed changes to the ACA while the case remains in the judicial system. Regardless, the highly-popular provisions of the law like protections for people with pre-existing conditions will be kept to pass legislation, even promised by many Republicans.

In Politico, Congresswoman Nancy Pelosi (CA-12), who is the presumed speaker of the house come January 3, called the decision an “absurd ruling.” She said the House “will move swiftly to formally intervene in the appeals process to uphold the life-saving protections for people with pre-existing conditions and reject Republicans’ effort to destroy the Affordable Care Act.”

The decision by Texas’ Northern District goes against the landmark ruling in National Federation of Independent Business v. Sebelius (2012), wherein Supreme Court Chief Justice John Roberts, another Bush appointee, sided with the liberal section of the bench in the 5-4 judgement that upheld Congress’ power to enact most provisions of the ACA through its powers of the purse vested in the U.S. Constitution.

Chief Justice Roberts, writing only for himself, held that Congress’s power to “regulate Commerce” as stated within  Article 1, Section 8, Clause 3 of the U.S. Constitution, does not extend to the regulation of economic inactivity – meaning the individual mandate did not fall within Congress’s powers under the Commerce Clause.

“It is abundantly clear the Constitution does not guarantee that individuals may avoid taxation through inactivity,” Roberts wrote. “A capitation, after all, is a tax that everyone must pay simply for existing, and capitations are expressly contemplated by the Constitution. The Court today holds that our Constitution protects us from federal regulation under the Commerce Clause so long as we abstain from the regulated activity. But from its creation, the Constitution has made no such promise with respect to taxes.”

A capitation is best described as a fee for receiving a service, which cannot be levied in this case. Though, Roberts opens the door to give a large interpretation of Congress’ taxing powers.

“The Affordable Care Act is constitutional in part and unconstitutional in part,” the chief justice added. “The individual mandate cannot be upheld as an exercise of Congress’s power under the Commerce Clause…[which] authorizes Congress to regulate interstate commerce, not to order individuals to engage in it. In this case, however, it is reasonable to construe what Congress has done as increasing taxes on those who have a certain amount of income, but choose to go without health insurance. Such legislation is within Congress’s power to tax.”

He also wrote that the federal government does not have the power to order people to buy health insurance, explaining that Section 5000A of the IRS Code (requirement to maintain minimum essential insurance coverage) would therefore be unconstitutional “if read as a command.” The U.S. government, however, does have the power to impose a tax on those without health insurance, with Section 5000A therefore being constitutional as it “can reasonably be read as a tax,” Roberts said.

As well, Chief Justice Roberts held, joined also by Justices Ruth Bader Ginsburg, Stephen Breyer, Sonia Sotomayor, and Elena Kagan, that the individual mandate is not precluded by the Anti-Injunction Act – due to the ACA’s label of the individual mandate as a “penalty” instead of a “tax.” This prevents it from being treated as a tax under the Act.

In their dissenting opinion, the conservative block of the court found that the mandate was not a tax in the first place and the way in which it was labeled did not matter. Furthermore, they argued that reclassifying the mandate as a tax rather than a penalty “in order to sustain its constitutionality” did not stand for the cause of interpreting the provision, but rewriting it.

The Supreme court’s ruling was the most significantly bolstering provision to federalism since President Franklin D. Roosevelt’s New Deal. As many attempts have been made to undermine or invalidate parts of the law, even with a Republican majority in Congress, it seems that it will be a while before the ACA is fully terminated. With President Trump appointing more and more conservative justices to federal benches, it could be that O’Connor’s ruling foreshadows what is to happen in the next few years.