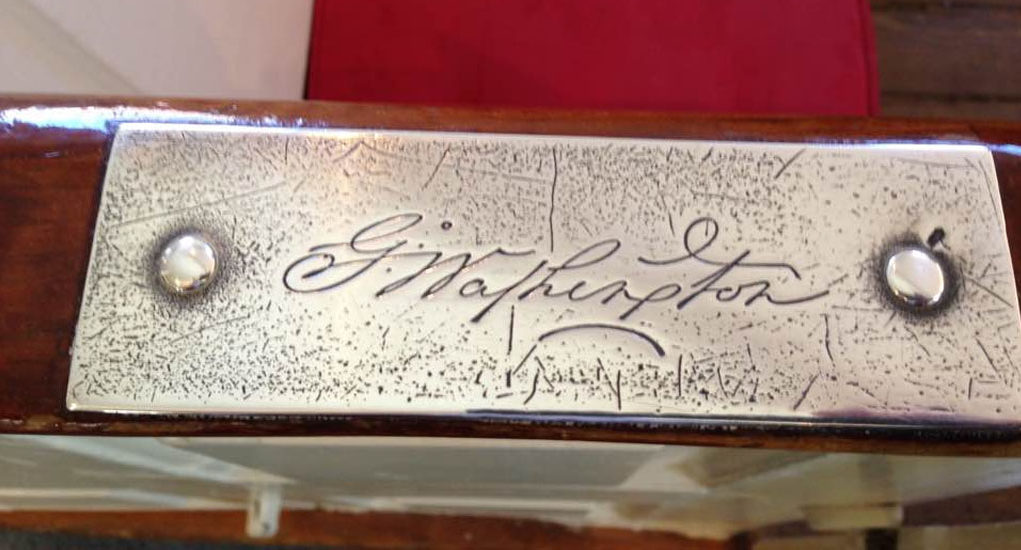 That’s precisely how the board of Episcopalian Christ Church in Alexandra decided to rip out two plaques — signatures — indicating the pews where Confederate General Robert E. Lee and Revolutionary War General George Washington sat, both men being parishioners.

Their crime?  Being men of their time who fought for a better world.  From the multi-page letter issued by the worldly wise and self-enlightened board:

Hebrews 13:2 says, “Do not neglect to show hospitality to strangers, for thereby some have entertained angels unawares.” Christ Church lives into this call, feeding the hungry with our Lazarus ministry, welcoming the stranger in our refugee ministry, and inviting all to worship with us. The plaques in our sanctuary make some in our presence feel unsafe or unwelcome. Some visitors and guests who worship with us choose not to return because they receive an unintended message from the prominent presence of the plaques.

Many in our congregation feel a strong need for the church to stand clearly on the side of “All are welcome — no exceptions.”

Ignore for a moment that “All are welcome — no exceptions” as a maxim simply doesn’t rest on as strong an authority as say, the Book of Hebrews.  Let’s further ignore for a moment that both men were practicing Episcopalians, prayed the same Book of Common Prayer, believed in the same principles, the same values, fought for the same country — Virginia.  Participated in a system whose fundamental principles rested neither in the wage slavery of the industrialized North nor in the cheap consumerism that ties Chinese workers to a factory bench for 14 hours making iPhones.

Their crime was making the other feel uncomfortable, and in a parish that is apparently more a museum for saints rather than a hospital for sinners — well, let’s just say that some sinners are more equal than others:

The Vestry has unanimously decided that the plaques create a distraction in our worship space and may create an obstacle to our identity as a welcoming church, and an impediment to our growth and to full community with our neighbors. Accordingly, the plaques will be relocated no later than the summer of 2018.

This decision is a beginning, not an end.

We should trust them to their word.  The iconoclasts have already come after images of veterans in the National Cathedral (so called — I was not aware that Episcopalianism was the national creed), torn down Lee’s memory in Lexington, Virginia with its thirst barely slaked for the whitewashing of memory.

The letter ends with an all too typical attempt to unite what they divided through a prayer — the mulligan of every do-gooder — asking for unity and healing in the wake of their decision.  Or perhaps the errantly believe that two signatures on two pews with historic significance drove people away from worship?

Of course, the converse can always be argued.  Do two signatures actually matter in a place where Christ should be the focus?  The answer ought to be an unequivocal yes, and here’s why.  In a Christian parish, we are united by two realities: that every one of us is a sinner, and that there is a all-knowing God in whom — when we ask forgiveness — actually chooses to forget our sins against Him.

To say that somehow, there are two souls whose sins — social or private, since “social sin” seems to be the fashion nowadays — are so unforgivable as to be given the penalty of the damnatio memorae, a penalty reserved for the most odious of human beings, is a calumny not against Christ Church, but against Christ Himself.

…not to mention, pays heed to the cultural terrorism (and yes, these words are carefully chosen) that seems to be all the rage among the fanatics of a particular secular religion, one whose faith in its ideas prevailed today against the Christian faith.  Unanimously.

For the rest of us watching, reminders that the whitewashing of history will not stop with Lee and Jackson are growing legion.  Jefferson in Charlottesville; Washington — the Father of his country — in his own parish…

The vestry board would have done better to read Proverbs 22:1.