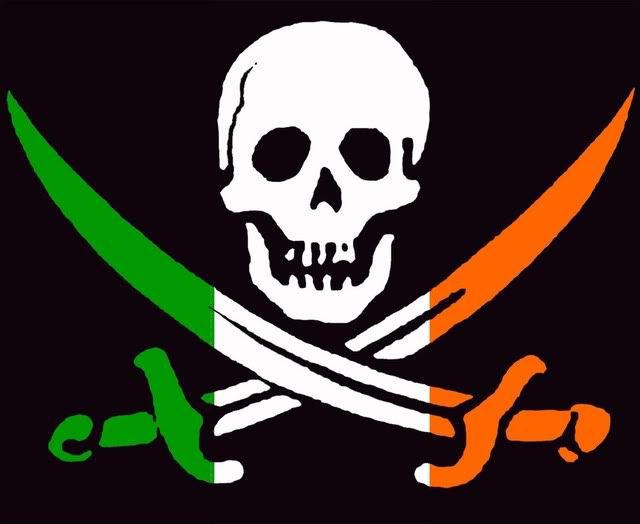 On August 22, 1609, Sir Richard Moryson appealed to Robert Cecil, Earl of Salisbury, to sentence Irish Pirates to Virginia as punishment for their crimes.

It was the early days of the Virginia colony (or plantation), and its existence was still precarious. After two years of hunger, bad relations with the natives, political infighting, and no discernible export, no one was sure the investment would succeed.

Parallel to the Virginia colony was another English expedition, but much closer to St. James’s Palace: the Irish Colony. After Henry VIII left the Roman Catholic Church and adopted Protestantism as the official faith of the realm, the staunch Catholics in Ireland – under English rule – became more and more isolated and persecuted. England sent colonizers to Ireland, to whom the crown gave land previously owned by native Catholic Irish. Cycles of vengeance created bad relations between English colonizers and the Irish, and many rebellions and wars were fought in the early part of the 17th Century.

One of the footnotes to that time period was the increase in Irish piracy that served to frustrate the English colony’s commerce and administration. One of the most famous pirates of the time was John Jennings – likely a Roman Catholic, but more definitely an opportunist – who elevated the concern of piracy enough for the administration to request an increase in martial and legislative support from England.

Lord Danvers complained to the Privy Council that “to the increase of his lewd company, Jennings is come into the river of Limerick after a great fight and the loss of three score [60] men, with a rich freight aboard himself besides…. [It] is likewise very doubtful whether the pirates are to be subdued or expulsed from hence by this large expense upon His Majesty’s ships, which are driven to revictual [resupply] or repair every three months in England, where contrary winds and the mariners’ affection to their own home likely retains them long.”

The Lords of the Council pleaded with Sir Arthur Chichester, Lord Deputy of Ireland (the King’s highest representative) to lobby the king to allow local courts to prosecute pirates for swifter justice. “[We] believe that the great recourse of pirates to the coasts of Ireland is owing to the want of such a statute as that of the 28th of Henry VIII in England, which enables their being tried by commission, and takes away the benefit of clergy. He is accordingly from time to time to send over all pirates whose conduct deserves death to Barnstaple, Bristol, or West Chester, there to be kept safe in custody by the chief officers till they receive directions from the Council or the Lord Admiral.”

The Irish Colony was repeatedly frustrated by red tape and bureaucracy. After the eventual and celebrated capture of Jennings in 1609, the Vice President of Munster, Richard Moryson, sought to avoid the hassles of admiralty courts, and came up with a win-win solution: Send all the pirates to Virginia!

He wrote to the Earl of Salisbury, Robert Cecil, who was very influential in the King’s Court, that Ireland was practically impotent against the pirates. Despite proclamations warning citizens not to engage in commerce with pirates on the black market, their numbers continued to grow. “They are now here,” wrote Moryson, “being 11 sails and 1,000 men, that [Chichester] is enforced to forbear any prosecution of them, fearing to engage this unruly multitude into any act either of spoiling or burning the country.”

Moryson believed it would profit the kingdom and all her colonies to emigrate these pirates instead across the Atlantic.

“Should his Lordship please to allow of their employment in the intended plantation of Virginia, which he has not yet motioned to them, he thinks good use might be made of them for the present there, both in defending them now in the beginning, if they shall be disturbed by any in their first settling, in relieving their wants from time to time, and in easing the charge of the journey coming so good cheap. Besides, being active men and good mariners, hereafter when time shall wear out their former offences, with better desert [that which is deserved] in other countries not troubled so near at hand with their spoiling, they may return and prove necessary instruments of His Majesty’s service. But if they be thus permitted to continue in number and offending, they may prove dangerous, as has been many times seen from less beginnings. They expect 10 sail more to join with them, hearing of a fleet setting forth to suppress them. Begs to be informed what course his Lordship shall be pleased to command him to take with them if they stay here or return ; which there is no doubt but they will shortly, this being their only place of relief, being so plentifully supplied for all sea provisions by the fishermen that come daily out of England with merchandise.”

Basically, Ireland gets rid of pirates by sending them to Virginia; Virginia gains a pseudo-Navy that can both protect against and harass the Spanish ships; England gets the spoils of privateering; and the pirates get a chance to work off their offences against the crown.

Not a bad idea, but apparently it never happened.

One thing to note in closing, however, is that the Irish administration did not think much of the Virginia plantation. It was not a desirable venture; and it would indeed have been a punishment in their eyes to banish the pirates to the desolate wilderness of Virginia in 1609.

The Lord Deputy of Ireland, Arthur Chichester, pleaded with King James while apologizing for administrative inefficiencies and sloth in meeting goals, “If my poor endeavors may give any help and furtherance to so glorious and worthy a design, besides my obedience to your Majesty, my heart is so well affected unto it, that I had rather labour with my hands in the plantation of Ulster, than dance or play in that of Virginia.”