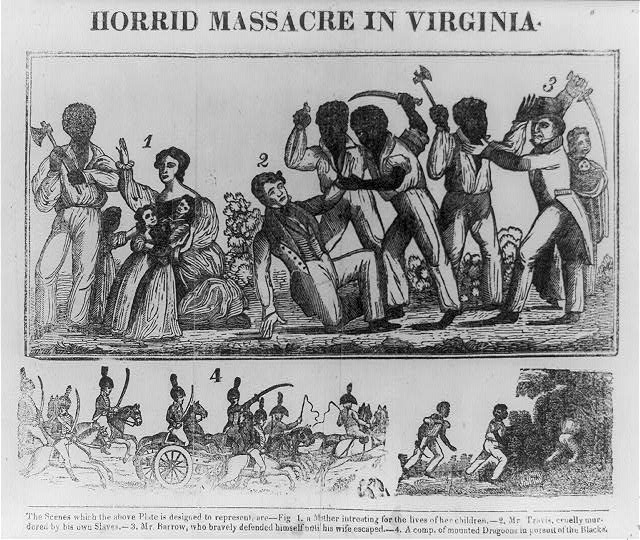 On August 21, 1831, Nat Turner and a group of other slaves rebelled against their slave owners and killed nearly 60 people while freeing fellow slaves in Southampton County, Virginia.

The issue is very complex. There’s so much that can be said about the events leading up to the rebellion, or insurrection. There’s even more that can be said about the consequences of the event: how it caused a state of panic among white slave owners and whites in general, how whites unjustly murdered slaves and blacks in general after the event, how it caused the south in general to adopt a paternalistic portrait of slavery. There are many resources on these issues from authors more erudite than I am, the most recent being Patrick H. Breen’s The Land Shall Be Deluged in Blood: A New History of the Nat Turner Revolt (2015).

While I believe the murders by Nat Turner and by those in reaction to his rebellion can all be condemned, I’m reluctant to offer any further personal insight. In the spirit of trying to understand the mindset of the times, however, I can offer a summary given by the Richmond Enquirer. This is admittedly a biased white perspective sympathetic to slaveholding, and does not tell the whole story. Some blacks of Turner’s generation referred to him as a patriot, like Henry Highland Garnet; but others condemned the revolt. William Lloyd Garrison in no uncertain terms condemned it himself, as well.

Whether good (the abolition of slavery) was ultimately accomplished as a direct result of the evil actions of others in not a question I wish to answer in this case. But it is undeniable that Nat Turner did affect the mindset of Virginians, southerners, and perhaps all Americans in some way by his rebellion.

From the Richmond Inquirer:

A letter was received on Tuesday morning from Col. Trezvant, who lives at Jerusalem, in the county of Southampton, stating that an “insurrection” had broken out among the blacks – that several white families had been destroyed, that arms and ammunition were wanting in Southampton, and that a considerable military force might be required to subdue the disturbers.—Jerusalem is about 70 miles from Richmond – Col T’s letter was written on the 21st – evidently in great haste – without giving numbers, names, &c. – It was sent by express to the Authorities of the Town of Petersburg – and by them despatched to the Mayor of this city.

It was received on Tuesday morning, and laid before the Governor. The Council being convened, (there being no other member in the city than the Lieut. Gov.) the advice was given to take the earliest and most efficient measures – Arrangements were immediately taken by the Chief Magistrate for the purpose. Arms and ammunition were despatched in wagons to the county of Southampton. The four Volunteer Companies of Petersburg, the Dragoons and Lafayette Artillery Company of Richmond, one Volunteer Company from Norfolk, and one from Portsmouth, and the Regiments of Southampton and Sussex, were at once ordered out.—The Dragoons of this city, commanded by Capt. Randolph Harrison, took up the line of march on Tuesday evening. –The Lafayette Artillery, commanded by John B. Richardson, embarked at 8 o’clock the same evening in the Steamboat Norfolk, to land at Smithfield – We presume that Brigadier General Eppes will command the detachments.

Another express on the same evening from the Mayor of Petersburg, requested the Governor to send over arms—which were accordingly despatched.

No authentic accounts have been received of the character of this unexpected transaction—of the number of blacks collected, of their designs, of the mischief they have done, whether they are the mere runaways who have broken out from the Swamps, or how many slaves of the neighboring plantations have joined—whether they have got together for more rapine and robbery, or for what.—But that these wretches will rue the day on which they broke loose upon the neighboring population, is most certain. A terrible retribution will fall upon their heads. –Dearly will they pay for their madness and their misdeeds.

Rumors are, of course, as “plenty as blackberries.”—There is, of course, much exaggeration in all our verbal and written accounts. The short letters which have been received are themselves the mere statements of rumors—none of them having been written by actual observers of the scene. We give such as have been received—the reader will know how to make allowance for the exaggerations in all such matters:

“The only information received since last night, is from a gentleman who came passenger in the Stage from Halifax, N.C. He was informed in Hick’s Ford that about thirty persons had been murdered. A company of between five and six hundred had been formed, and gone in pursuit of the negroes, who had retreated into the swamps.

“The driver, who came about 20 miles from here, says a Mr. Harris of Southampton was robbed of 15,000 dollars, and his son and son-in-law murdered. I cannot say positively that this information can be relied on.”

Extract of a letter from one of the Richmond Dragoons, dated Petersburg, Tuesday night [August 23], 11’oclock.

I have been diligent in my inquiries to obtain information that can be relied on. The result is, about 250 negroes from a Camp Meeting about the Dismal Swamp, set out on a marauding excursion, and have, for the sake of plunder, murdered about 60 persons, none of the families much known. We shall start in the morning at day break for Southampton, and will, I suppose be back in 2 or 3 days.”

Extract of a letter from Lawrenceville (Brunswick county) Aug. 23.

“We are all here under arms, having been informed of an insurrection broken out in Southampton by negroes, who are said to be headed by some few {whites}. They were yesterday and last night just below Hick’s Ford, as we are informed. Videttes [sentries] are placed between this place and Hick’s Ford.”

A letter was received on Wednesday morning from Col. *** H. Gholson of Brunswick county, addressed to the Governor, dated Lawrenceville, (Brunswick Court House) August 23rd, which states that it was reported that thirty families had been destroyed; that the blacked numbered from 3 to 400, and were within 4 or 5 miles of Belfield; that many families had, through alarm, **** into Lawrenceville for safety. Col. Gibson writes to the Governor for arms; which have been promptly sent on.

We suspect that the report about the agency of some few whites is a mistake – Belfield and Hick’s Ford are about half a mile apart – in Greensville, contiguous to the lower South, West part of Southampton.

We have later accounts, but they are still rumors; still deficient in authenticity. It is said that the leader of the blacks had been shot at the bridge in Jerusalem—that about 20 negroes were on their march to their rendezvous, and attacked by 4 whites – 6 killed, and several prisoners taken – It is said that there had {been} a skirmish between the largest body of blacks, and some few militia, that the negroes had fled into a wood—and the writer of the letter, who gives this account, believes that as soon as the troops are up, they would be completely surrounded and cut off. An ample retribution will be their for the blood which they had shed. Rumor had stated the number of their victims as high as 70 or 80, perhaps more—but such stories are always greatly exaggerated. We have no doubt it is in the present instance.

One of the last expresses states, that **** not all the blacks were runaways, who had broken out of the swamps, to rob and do mischief—that few, if any, of this plantation hands, had joined them—and in one case, he heard of a master of one of the estates turning out with his slaves, to meet a party coming to attack him—that two of the assailants had been killed, a third wounded, and the rest ran off.—He heard of several others being killed elsewhere.—But it is extremely difficult to get at the truth in all such cases.

The Governor received a letter by this express, yesterday morning, from Gen. Eppes of Sussex.

Gen Eppes believes that in a day or two all will be tranquil; that no more troops will be necessary, and perhaps those in service [to the militia] may be discharged, though there was a party near Southampton Court House, and a small one near Bellfield—that things look well.

These events have burst unexpectedly upon us. Everything is quiet here—Never more so—And indeed it is the same case, in every quarter from which we have heard – No one has dreamed of any such event happening in any part of Virginia.—A patrol turns out in our city every night—Our tranquility is perfectly unruffled—no disturbance, no suspicion, no panic—not even any excitement, except on account of our brethren of Southampton.—A temporary company of horse is organizing for a patrol, until our two Volunteer Companies return.

Again, this is a single account – the nearest report I could find – and is biased to the event for sure. While there may be commonalities in how this medium reports the events and how modern media reports events to exact action (“there will be a terrible retribution”), one thing I find unique to 1831 that is rarely found in 2017, is the repeated insistence on the exaggeration of early reports, and begging the reader not to read too much into them. That still happens occasionally today, but I am not sure the consumer of information, “will know how to make allowance for the exaggerations in all such matters.”