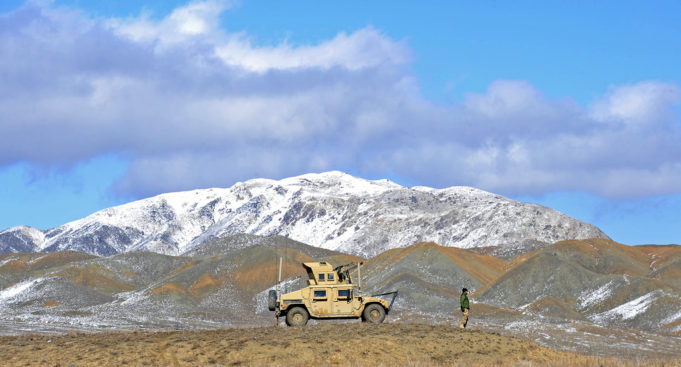 This week, Secretary of Defense Jim Mattis called for the international community, U.S. military partners in particular, to help end the ongoing war in Afghanistan. He has called on the world to provide aid to regional leaders in their efforts to bridge the divide between regional factions over historic disagreements, adding that the conflicts in Afghanistan have now gone on for “40 years.”

“In Afghanistan, it’s gone on now…it’s approaching 40 years; 40 years is enough, and it’s time for everyone to get on board, support the United Nations, support [Indian] Prime Minister [Narendra] Modi, support [Afghan] President [Ashraf] Ghani and all those who are trying to maintain peace and make for a better world here. So, we are on that track,” Mattis told reporters ahead of a meeting with his Indian counterpart, Nirmala Sitharaman, according to a report from The Hill.

The U.S. has had a military presence in the Asian country of Afghanistan for 17 years, since just after the September 11, 2001 terrorist attacks in Washington, D.C., New York City, and rural Pennsylvania. Soon thereafter, the Taliban government was removed from power. Regardless, Afghanistan has been in conflict ever since its most recent run of turmoil began in the late 1970s when U.S.-backed Afghan guerrillas repelled against the encroaching Soviet Union in a nine-year war, which weakened Russian resolve on the international stage in its mission to become a dominate world superpower.

American troops entered a new age of war as they were not fighting a clearly defined belligerent as had been tradition, but a decentralized group of insurgents waged by the Taliban and other armed groups that had home field advantage in a very geographically confusing country. Now, Defense Secretary Mattis claims he is currently concerned over Pakistan’s influence of armed enemy combatants fighting U.S. soldiers in the northern territories.

“The presence of U.S. troops in Afghanistan has also heightened U.S. sensitivity to the rivalry between nuclear-armed India and Pakistan. Washington and New Delhi share concerns over Pakistan-based anti-Western and anti-Indian Islamist militant groups,” he said.

In recent years, as the U.S. has withdrawn troops, the Taliban has continued to gain strength, with ISIS not far behind and expanding throughout the country. Meanwhile, the Taliban, ISIS, various tribal warlords, and the Afghan government all continue to fight each other.

Due to the chaos, however, time is one the side of the Taliban regime – they just have to wait until the U.S. leaves. At that point, a lack of a defensive force would allow the entire country to be taken over by an international terrorist network now based in a large, desolate, central Asian state surrounded by countries not as friendly with West as the U.S. may have hoped for.

Though, it’s not like this is new, that’s how it’s always been in Afghanistan – even before the U.S. involved itself in its longest conflict in history. It’s aftermath does not appear to be much; after all, the U.S. has spent more on the War in Afghanistan than they did in rebuilding the European continent after World War II.

Afghanistan is a notoriously difficult country to govern, which is why it has garnered the nickname of the “Graveyard of Empires” over the course of human history. The country has a history of being ransacked by regional powers, prevalence of tribalism and lawlessness over the millennia, deep cultural divides that date back before the Achaemenid Persian Empire, and its high, jagged-edged Himalayan geography that make efforts of autonomy, even attempted over the years by native Afghans, senseless.

Just some of the nation-states and empires that have tried to install some sort of autonomy in region over the last few thousand years, all of which failed according to The Diplomat, are the ancient Indian kingdom of Gandhara, the Maurya Empire, the Greco-Bactrians, the Indo-Parthians, the Saka, the Kushans, the Kidarites, the Hephthalites, the Mongols, the Mughal Empire, the Arabs, the Persians, the British, and the Russians. Unfortunately, now the United States of America may be added to the list.

In the more recent past, the last 200 years or so, the British and the Russians have learned that while it is very possible to conquer territorial swaths of Afghanistan in a temporary manner after beating back the Afghan military, in the age of asymmetrical warfare, it is as near to strategically impossible as it can get in holding down the region for long. Afghanistan has proven time again to be a vast, seemingly decentralized country filled with guerrilla fighters, tribal contingents, and de facto warlords that have the ability to knock a foreign superpower off its base, militarily.

If the United States and her allies are to see a comparative “victory” in Afghanistan, apart from a permanent occupation reminiscent of imperialism that would be bloody, costly, and ineffective, it is possible that the only way to deal with the country at-large is by dealing with, individually, its local power brokers. Nevertheless, that puts the situation awfully close to dealing with the Taliban, but the alternative outcome is continuing an expensive, unwinnable, never-ending conflict.