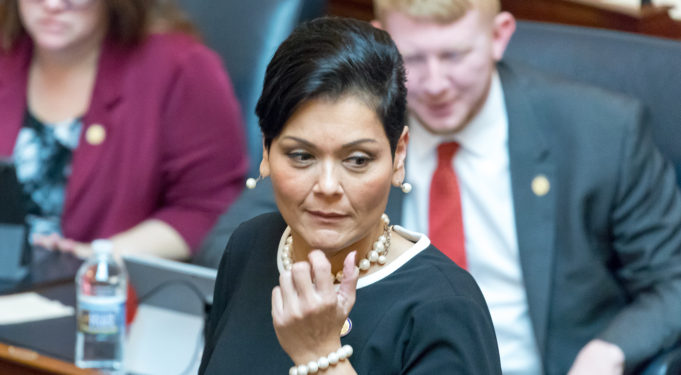 On Friday, Delegate Hala Ayala (D-Woodbridge) rose for a point of personal privilege on the House floor, announcing a coming effort to change the chamber’s rules as part of the Democratic Party’s efforts to expand taxpayer funded abortion in Virginia.

In effect, Ayala has proposed an unprecedented discharge of the committee system to hold a vote on a single measure.

That measure would, in effect, require taxpayer funding of abortion, based on court rulings in other states under similar language to that championed by Ayala.

“Therefore, Mr. Speaker, I laid upon your desk, on your table, a rules change affecting nothing but the ability of the resolution to have a vote,” said Ayala, on the House floor Friday.

Ayala’s effort to engineer an end-run around the rules of the House, for one specific measure, represents the latest effort by House Democrats to expand abortion in Virginia and require its funding by state taxpayers.

Earlier this session, Democratic leaders including Governor Ralph Northam, Lieutenant Governor Justin Fairfax, and Attorney General Mark Herring joined over a dozen lawmakers at a press conference making Tran’s third trimester abortion bill, the Repeal Act, one of two “priority” measures which they planned to campaign on in the fall.

“So when can’t change peoples minds, we need to change seats,” said Governor Northam, speaking to the role abortion would play in the fall elections.

That failed bill ultimately led to national condemnation and outrage after a video of Tran’s subcommittee testimony went viral, in which the bill’s lead sponsor confirmed, in her own words, that the measure would allow abortion on demand up until the moment of birth.

The Equal Rights Amendment, while billed as a symbolic measure for gender equality, has been criticized by abortion opponents who note that similar language has been interpreted by courts in other states to require taxpayer funding for abortion.

“Based on the independent grounds provided by the Equal Rights Amendment to Article II, Section 18 of the New Mexico Constitution, we affirm the district court’s orders granting Plaintiffs’ motion for summary judgment, permanently enjoining the Department from enforcing its May 1995 revision of Rule 766, and awarding costs to Plaintiffs,” ruled the court.

A similar lawsuit has been filed in Pennsylvania, in the case of Allegheny Reproductive Health Center, et. al., v. Pennsylvania Department of Human Services, attempting to overturn existing restrictions on the use of taxpayer money for elective abortion, on grounds of the state’s equal rights amendment (Art. I, § 28).

The Pennsylvania lawsuit is backed by a number of abortion clinics which would benefit, including Planned Parenthood.

Days ago, the Alaska Supreme Court also reached a similar ruling in the case of State of Alaska v. Planned Parenthood of the Great Northwest, holding that an existing state law restricting taxpayer funding of abortion to those that “must be performed to avoid a threat of serious risk to the life or physical health of the woman” was unconstitutional, because of language in the state’s constitution similar to the ERA (Art. I, § 3).

In this case, the court ruled that the elevated strict scrutiny standard required under the ERA prohibited lawmakers from drawing distinctions between elective abortions and abortions to save the life of the mother, in choosing which to fund with public money.

Similar rulings have been handed down by courts in other states, based on constitutional provisions similar to that which Ayala and Democratic lawmakers propose adding to the United States Constitution.

While Ayala and House allies bill the change as a vote on equality, the fervency of their push is but another in a long line of Democratic efforts to advance an agenda of unrestricted abortion this legislative session.