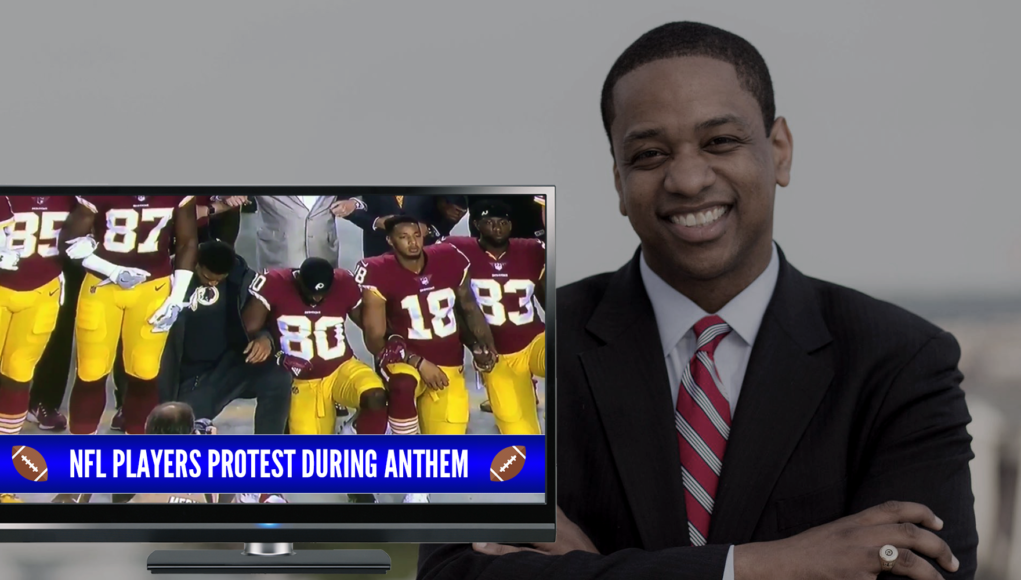 Undermining law enforcement has become one of the pet causes of the radical left.

It has athletes taking a knee during the anthem, and radical protestors taking to the streets, as far-left candidates like Virginia’s Justin Fairfax and members of Congress back them up on television and echo their talking points, even as angry fans cancel their subscriptions and burn their merchandise to protest players disrespecting the national anthem and the flag.

49’ers quarterback Colin Kaepernick brought the anthem protests to the NFL as his own take on the Black Lives Matter movement. That group, joined by the even more radical protesters of Antifa, demonstrated against police following high-profile use of force cases from 2014 onward.

Which brings us to Justin Fairfax, the Democrat running for Lieutenant Governor. When he’s not preaching about a “Second American Revolution” or picking up an endorsement from far-left Bernie Sanders group “Our Revolution,” Fairfax is busy siding with the NFL kneelers and going on talk shows, repeating to host Frank Islam the false accusations against police which fuel these protests.

Fairfax stood behind the protestors’ claim that officers acted unlawfully in these shootings, which he called “unjustified” even years after officers had been cleared of any wrongdoing.

This isn’t the first time he sided with the kneelers and Black Lives Matter protestors on the campaign trail.

Fairfax sided with left-wing protestors in calling for the removal of historical statues, saying they were “psychologically harmful” and should be torn down for “celebrating slavery.”

Fairfax’s statement on statues also noted his belief that officers’ actions in these shooting incidents had been “unjustified.”

At the first debate, he came out against protecting the identities of officers who fall into the crosshairs of the violent protestors.

There is no responsible way to put the information forward in the heat of violent protests.

Following the shooting of Michael Brown in St. Louis, violent hate mobs called for the killing of officer Darren Wilson and his family, who were forced to flee St. Louis and go into hiding. The threats continued even after Officer Wilson was cleared of any wrongdoing.

Mere truth, however, would not get in the way of those with an agenda.

That far-left agenda comes at the expense of law enforcement.

Fairfax’s actions disrespects our flag, disrupts our anthem, dishonors those who fought for our country, and makes first responders less safe.

It also injects radical politics into a cherished Sunday pastime. No wonder so many fans have taken to social media to express their frustration and anger with the kneelers, their teams, and the politicians who support radical left-wing politics.