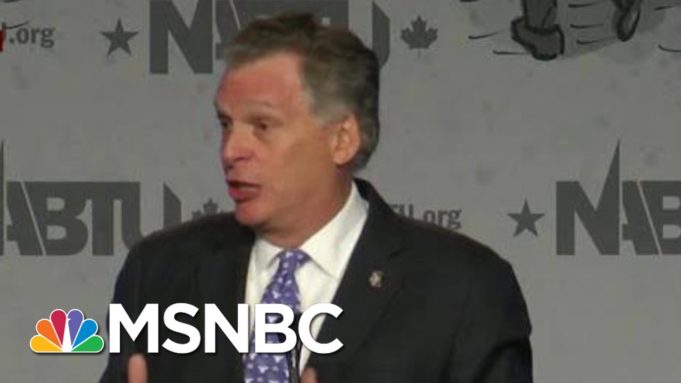 Virginia Democrats were counting on former Gov. Terry McAuliffe to raise money for them.

Then he wrote a book about Charlottesville that has some Democrats hopping mad.

McAuliffe, now a CNN contributor, has stepped into the fundraising void left by Gov. Ralph Northam, who has been hobbled by his blackface/Klan hood/moonwalking scandal.

Democrats were hopeful that McAuliffe, a legendary blue team fundraiser, could fill in the gaping hole left in their efforts by the sidelined Northam.

But his account of how things happened that fateful day in August 2017 read more like an exercise in passing the buck.

For months in 2017, city and state authorities worked on plans for a large protest by white nationalists in Emancipation Park — a response to the city’s decision to take down a statue of Robert E. Lee and rename the park that had previously carried his moniker.

But authorities were caught off guard by a tiki torch procession by neo-Nazis and other white nationalists the night before. On the day of the protest, far-left Antifa protesters and the neo-Nazis came into close contact, which ended bloodshed.

Heather Heyer, a young woman involved in the counter protest, was run down by a neo-Nazi with his car as he intentionally drove into the crowd.

McAuliffe’s book is a revisionist account of what happened, according to former Charlottesville Mayor Mike Signer, now a city councilman.

“Instead of evenly examining all of the state’s decisions, including its mistakes, so we can learn and grow, the book instead blames everyone else, while making significant errors in the process,” Signer said in a written statement.

Other Democrats, including liberal blog Blue Virginia, took McAuliffe and his administration to task for failing to plan ahead.

“Moran and Sabato were struck by how well organized the neo-Nazis were. Maybe because it so contrasted with the unorganized state and local response,” blogger Dan Sullivan wrote.

“Here at this moment, they had had six months during which to analyze and prepare for this. There were some twelve hours remaining to issue orders,” he wrote. “The Governor demurred.”

A later investigation faulted the city and state officials for putting police safety ahead of public safety during the event. Fighting between the two sides continued in front of police for more than an hour before it was stopped

Officers were dressed in everyday uniforms, not riot gear, at the start of the event, according to the report. Instead of having helmets and shields next to the officers, the equipment was staged behind barricades, which meant officers had to leave the scene to get their gear, the AP reports.

“Because of their misalignment and lack of accessible protective gear, officers failed to intervene in physical altercations that took place in areas adjacent to Emancipation Park,” where the Lee statue stands, the report said.

State police directed their officers ‘to remain behind barricades rather than risk injury responding to conflicts between protesters and counter-protesters,’ the report said. And Charlottesville commanders ‘similarly instructed their officers not to intervene in all but the most serious physical confrontations.’