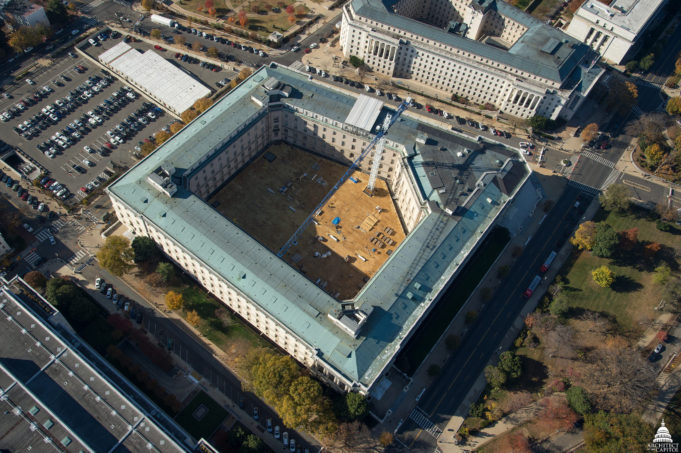 Republican congressman-elect Denver Riggleman (VA-5) has not lost his stride since coming away with 53 percent of the vote in Central Virginia on Election Day three weeks ago. In fact, he told reporters during the orientation period for the “freshman class” of the 116th Congress that he is on the move “[T]welve to 14 hours a day.”

“But,” he adds, “there’s the dinners, and all the good stuff that goes along with this honeymoon period.”

Speaking to Inside Nova, Riggleman said that he also witnessed some of the ruckus caused by fellow freshman representative-elect Alexandria Osacio-Cortez (NY-14) at a protest outside the office of the presumed speaker of the house next year Nancy Pelosi (CA-12).

“Did you see what Cortez did, storming Pelosi’s office?” he emphatically remarked.

Just down the hall from Riggleman’s orientation in the Cannon House Office Building, a crowd of over 200 protesters convened on Pelosi’s doorstep demanding action on climate change legislation. After Osacio-Cortez led the barrage on the Democratic minority leader’s office, at least 50 protesters were arrested by Capitol Police.

While he says he “understands” the concern behind global warming and climate change, the Virginia Republican has issues with the “techniques” being used by some Democratic newcomers in their effort to grow the progressive wing of the party and rebel against the rank-in-file leadership.

“You have to be solemn and respectful of the office you take,” Riggleman said.

The Air Force veteran and distillery owner added, “I have served my country my entire life…and as we start our congressional session we have to take that responsibility and treat it with the respect it deserves.”

When it comes to the lawmaking process, the congressman-elect says he will continue “fighting for the 5th district” on a range of issues, saying that  “bipartisanship” is extremely important. He adds that Republicans and Democrats should work together “or nothing will get done, it would be an absolute stonewall on both sides. Even me, and I’m pretty conservative, I don’t want to see us throw bombs at each other.”

Nevertheless, with Democrats gaining 38 seats in the House of Representatives – currently a 233-200 majority for the liberal party with two races in recount – next year’s session is likely to begin quickly on January 3 as some tax cuts are set to expire, with emphasis on healthcare and immigration legislation.

Riggleman stated that he will work to treat his elected position with great reverence in his duty to serve Virginia’s Fifth Congressional District.

“I feel it every day I walk into the Capitol Building,” he said. “It’s about humility. We are servants [tasked to] do the best job every day, and I promise to do the best I can, to serve transparently and with integrity.”