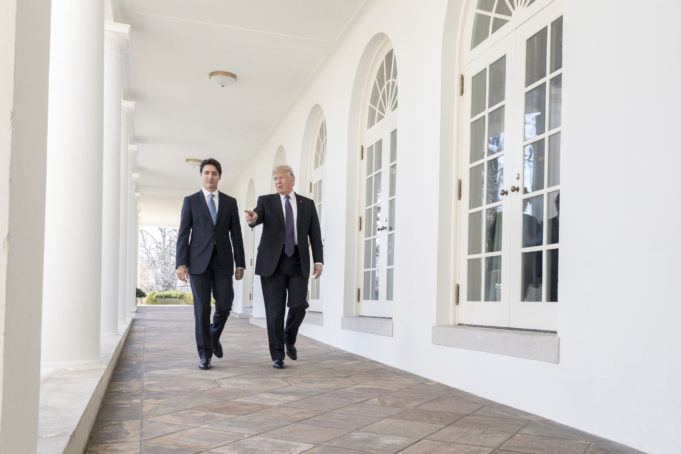 While tension on trade with Canada is on the rise after mutual tariffs blur the lines of our NAFTA partner and neighbor to the north, the Department of Homeland Security (DHS), interestingly, has announced their “Northern Border Strategy” to ward of terrorism stemming from the Great White North. According to a report from Newsweek, the “strengthened” plan is set to “combat terrorism” and “help facilitate travel and trade” at the U.S. border with Canada.

On Tuesday, the DHS published the press release outlining their strategy. The plan, “establishes a clear vision and concrete actions that will improve DHS’s efforts to safeguard our northern border against terrorist and criminal threats, facilitate the safe and efficient flow of lawful cross-border trade and travel and strengthen cross-border critical infrastructure protection and community resilience.”

The announcement of the Northern Border Strategy came just days after President Donald Trump pushed a 25 percent tariff on steel, a 10 percent tariff on aluminum, and other duties levied on automotive products from Canada. The Trump Administration cited a “national security” threat in placing tariffs, which are presumed to be temporary.

The tensions took a bad turn as well when Trump costed Canadian Prime Minister Justin Trudeau, calling him “meek and mild,” after a turbulent G-7 summit this week.

President did so after Trudeau called the tariffs “insulting,” citing a long free-trade economic relationship between the two countries. At a press conference on Saturday, the Canadian leader said that he vowed to, “move forward with retaliatory measures on July 1, applying equivalent tariffs to the ones that Americans have unjustly applied to us.”

“I have made it very clear to the president that it is not something we relish doing, but it is something that we absolutely will do,” Trudeau said in the report. “As Canadians, we are polite, we’re reasonable, but also we will not be pushed around.”

Concerning the new DHS strategy, it comes as an update to the 2012 plan after a Northern Border Threat Analysis Report was delivered to Congress last summer. Officials concluded that although the Northern border, “remains an area of limited threat in comparison to the U.S. Southern border, safeguarding and securing the northern border presents unique challenges.”

“The most common threat to U.S. public safety along the Northern border continues to be the bi-directional flow of illicit drugs,” the DHS said in its updated Northern Border Strategy, which “supersedes” the 2012 installment.

“Transnational criminal organizations [TCOs] are also active along the border and they continually adapt their drug production, smuggling methods, and routes to avoid detection by U.S. and Canadian law enforcement,” the document explains.

While Canada is not seen by many to have a large base of terrorist activity, the report also concluded that there is a threat to the U.S. that exists. The DHS says these threats come, “primarily from homegrown violent extremists in Canada who are not included in the U.S. Government’s consolidated terrorist watch list and could therefore enter the U.S. legally at the Northern Border ports of entry without suspicion.”

The previous plan, introduced during the Obama Administration, specified goals of, “deterring and preventing terrorism and smuggling, trafficking and illegal immigration.” However, the report states that the the language used in the updated border strategy appears to be “markedly stronger.”

The DHS has said it will engage with “key state, local, tribal and Canadian partners” to implement its new strategy. Moreover, within 180 days of the approval of the plan, an implementation stage will begin, and will be reviewed and reconsidered on a five-year basis.