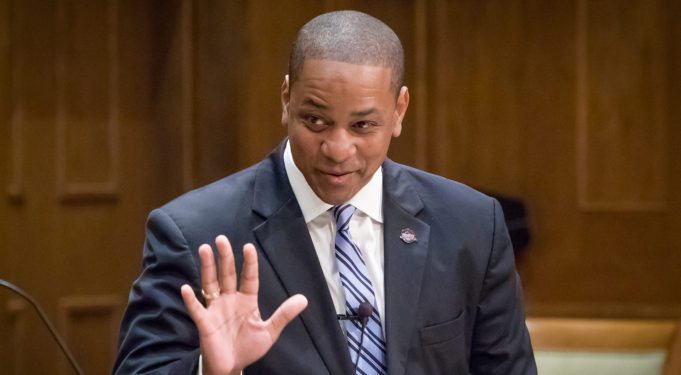 In the political chaos that elevated over the weekend after embattled Virginia Governor Ralph Northam (D) denied having appeared in the racist photo that surfaced the day prior, which included an attempt to “moonwalk” in front of reporters in a press conference, the story seems to get weirder and weirder.

In the hours following, sexual assault allegations surfaced involving Lieutenant Governor Justin Fairfax (D), who would ascend to the governorship if, rather when, Northam resigns.

Responding to the accusations, in a shocking display of the deep-seeded fractures developing within Virginia’s Democratic Party, Fairfax suggested that supporters of Governor Northam leaked the sexual assault accusations, according to a report from the New York Times.

“Does anybody think it’s any coincidence that on the eve of potentially my being elevated that that’s when this uncorroborated smear comes out?” Fairfax told reporters in the crowded capitol rotunda.

The political perdition came into public view Sunday morning when a group backing Fairfax, the Collective PAC, tweeted out a statement leveling accusations against Northam, which occurred even before the conservative website Big League Politics first surfaced the account by Fairfax’s accuser.

Although Fairfax supporters and many in the Democratic party believed the situation was nothing more than a political hit-job, they may now be walking back those presumptions after a statement released by the Democratic Party of Virginia alludes to something very peculiar happening outside the purview of the public eye.

“All allegations of sexual assault deserve to be taken with profound gravity. We will continue to evaluate the claims regarding Lieutenant Governor Fairfax.”

So, what do they know now?