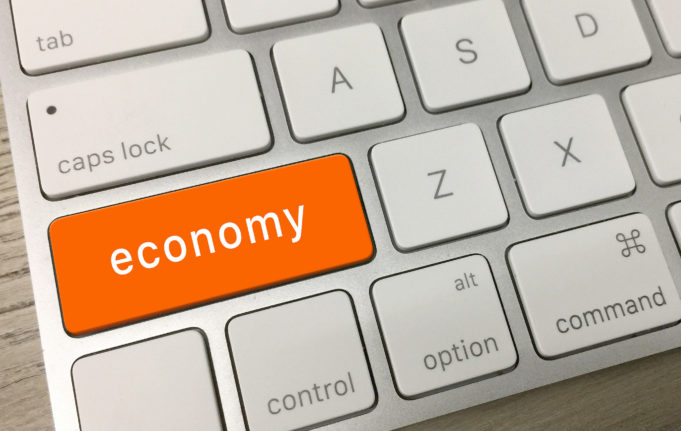 The Wall Street Journal has the big news this morning as the US economy — thanks to Republican tax reform early in the Trump presidency — is primed for a historic recovery after all:

The Congressional Budget Office said it expects gross domestic product, the broadest measure of economic output, will return to its pre-pandemic level by the middle of this year, thanks in part to a surge of relief spending Congress authorized in 2020, including aid for households and businesses.

Gross domestic product is expected to grow 3.7% in the fourth quarter of 2021 compared with a year earlier and to expand 2.4% in 2022. Growth will average 2.6% a year through 2025, the CBO said. The agency said a roughly $900 billion relief bill enacted in December will add about 1.5% to the level of GDP this year and next.

Add to the fact that Americans are sitting on over $1.6T in savings right now and all signs are pointing towards a massive repeat of the Roaring Twenties.

…complete with debt bubble, per the UK Economist:

Indeed, the arithmetic of stimulus is a second reason why the economy may heat up. Before December, total fiscal stimulus in 2020 amounted to almost $3trn (about 14% of gdp in 2019), much more than the probable fall in output. Social-distancing measures meant that much of this cash piled up in bank accounts. According to Fannie Mae, a government-backed housing-finance firm, by mid-December Americans had accumulated about $1.6trn in excess savings. It is hard to know what might happen to this cash pile; economists typically assume that households are much less likely to spend wealth windfalls (such as the gains from a rise in the stockmarket) than income. But if people instead regard these excess savings as delayed income, then the cash hoard represents stimulus that has not yet gone to work, to be unleashed when the economy fully reopens.

In short, not only are we sitting on a pile of cash, but the added stimulus spending that has whipped out the national credit card is going to either want to be repaid, or is going to rely upon America’s GDP to grow at Trump-era 5% annual growth while Washington scales back on spending.

In December President Donald Trump signed into law another $935bn of deficit spending, which extended unemployment benefits, provided more support for small firms, and sent most Americans a cheque for $600. This ensured that lost income would continue to be replaced. Mr Biden’s proposed $1.9trn of stimulus, which includes another $1,400 in cheques, would make the total fiscal boost in 2021 roughly equal to that in 2020.

In short, the bubble we are sitting on at present is an inflationary one, where the unleashing of $1.9T upon an America already sitting on $1.6T and the Federal Reserve interest rate sitting at zero means that the US Dollar is about to take a massive hit in a serious, tangible way.

Some of this explains why commodities such as silver are up, from a pre-pandemic low of $11 to an all-time high of $29 as of this writing.  Gold futures are up $400 from March 2020 numbers.  Safe harbors as a hedge against inflation, so it seems, are the order of the day.

Yet much of this hinges on whether or not Biden is prepared to enact Democratic policies via pandemic spending, hence the reason why Pelosi and the House Democrats were fighting any stimulus spending tooth and nail before Biden entered the White House — such efforts would shorten the fuse, so to speak, for radical change.

Should the Biden White House elect to do so, then the gloves come off rather quickly with the Federal Reserve.  The only other option — which may be out of the hands of policy makers in Washington — is that the pandemic recovery is slow elsewhere in the world, and the United States becomes the mass beneficiary as a “safe harbor” for capital — resources we can and should invest in infrastructure.

Yet therein lies a different problem — the “Dutch Disease” of the 1970s — where American finance and development make offshore goods that much more palatable and attainable with American capital.  The result is the bleeding of economic capital overseas while American manufacturing continues to suffer as a result.

Thus the Biden administration finds itself in a similar bind (but a better hand) than the Obama administration found itself with in 2009.  The difference here, of course, is that Mr. Trump left behind a far stronger economy than Mr. Bush — thus enabling the best of all possible crises: what to do with an economic recovery so strong it threatens to capsize the whole?