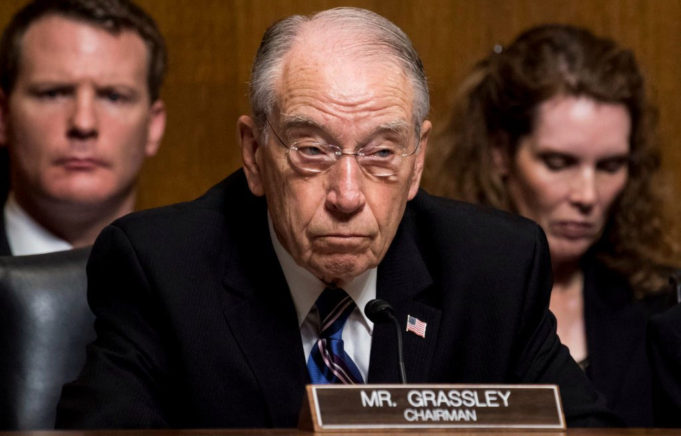 In the weeks since Justice Brett Kavanaugh has been confirmed to the U.S. Supreme Court, Senate Judiciary Committee Chairman Chuck Grassley (R-IA) has referred three people to federal authorities to be investigated for making false claims against the high court nominee. Grassley has requested the FBI to investigate Julie Swetnick, who accused Kavanaugh of drunken behavior and sexual assault; Michael Avenatti, her lawyer who also represented adult actress Stormy Daniels in a lawsuit against President Donald Trump; and an unidentified man who recanted an allegation he made against Kavanaugh.

Days ago, a fourth request was made following a letter sent to FBI Director Chris Wray from Grassley, detailing another person who made false allegations during the confirmation process. The person named in the letter is Judy Munro-Leighton who originally took responsibility for writing an anonymous letter to Senator Kamala Harris (D-CA) about an alleged incident that told of Kavanaugh and a friend raping her decades ago.

According to USA Today, the letter was signed by a “Jane Doe” from Oceanside, California. However, after Kavanaugh had categorically denied the allegations and Senate investigators were analyzing the situation, it was found that Ms. Doe was actually Munro-Leighton, who also lived in Kentucky. Grassley also claims the woman is a “left-wing activist.”

The woman has now claimed that she did not write the letter and, in fact, had never met Kavanaugh. Grassley said in his letter to the FBI that the entire thing was “just a ploy” because “she was opposed to Judge Kavanaugh’s confirmation.”

Munro-Leighton reportedly admitted she wrote an email to senators after seeing the “Jane Doe” letter in news reports. She claimed to be Jane Doe so the letter would gain attention. She told investigators, “I was angry and I sent it out,” however, according to Grassley’s letter, that was false.

Grassley wrote to Director Wray, “The Committee is grateful to citizens who come forward with relevant information in good faith, even if they are not one hundred percent sure about what they know.”

“But when individuals intentionally mislead the Committee,” Grassley continued, “they divert Committee resources during time-sensitive investigations and materially impede our work. Such acts are not only unfair; they are potentially illegal.”

The question that now must be answered: who wrote the letter?