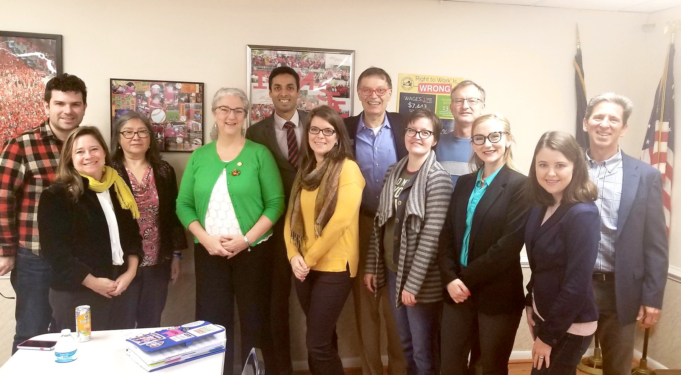 One Virginia lawmaker and three of her fellow candidates for the House of Delegates appear to back repealing Virginia’s Right to Work law, a photo taken in a lawmaker’s office suggests.

Delegate Cheryl Turpin (D-Virginia Beach) tweeted the photo of herself with three fellow Democratic House candidates, Tristan Shields, Shelly Simonds, and Jess Foster, standing in front of a poster declaring “Right to Work is WRONG” during a Democratic candidate training in Richmond.

Right to work laws provide that employees may not be forced to join a union or pay membership dues as a condition of employment.

Currently, Virginia is one of twenty-seven states with Right to Work laws on the books, according to statistics compiled by the National Right to Work Legal Defense Foundation. First enacted in 1947, Virginia’s Right to Work law was among the first in the nation, and enjoyed many decades of bipartisan support.

Additionally, Virginia is the nation’s most northeastern Right to Work state, which proponents credit for contributing to the Commonwealth’s business climate compared to competitors such as Maryland, New York, and New Jersey, in sectors ranging from manufacturing, to services, to a growing logistics industry centered around the Port of Virginia.

These laws, studies have found, contribute to higher economic growth, lower rates of unemployment, and greater after-tax income for workers.

“We don’t have a right-to-work issue here,” minority leader David Toscano (D-Charlottesville) told NBC29 in 2012. “No one’s arguing that it should be repealed in Virginia, so I don’t see what the rationale is.”

“I’d ask the gentleman in light of his worry about a challenge, can he point to any time that this Right to Work statute has been challenged in the sense that legislation has been offered to overturn it or repeal it?”

“For the life of me, I can’t understand the rationale for why this bill is here,” Toscano continued, in saying the amendment was “not a pressing concern.”

Bell responded by insisting that the right deserved preemptive protection against future efforts to repeal the statute — a concern which appears to have been well-founded in retrospect.

“If it is your preference to wait until there is a pressing need, to wait until an emergency, exists, that’s fine,” Bell said “On the other hand, if you choose to be proactive, and have safeguards in place so that those needs never arise, then you would be standing with me on Right to Work.”

“The only thing that changes is that we have permanent protection for our workers.”

Bell’s concern was also shared by the measure’s Senate patron, Mark Obenshain (R-Rockingham), who argued that future General Assemblies may not protect the right, reported the Washington Post.

While that may have been the case in 2016, the Democratic freshman class of 2017 forever altered that balance.

During his campaign, freshman lawmaker and self-described “socialist” Delegate Lee Carter (D-Manassas) showed his open antagonism towards the law by sharing a video of himself feeding a candidate survey from the National Right to Work Committee into a paper shredder.

“Yes, I will work to overturn Virginia’s RTW laws,” Carter later tweeted in response to the Virginia Chamber of Commerce.

Backed by progressives like Turpin and Carter, Virginia’s Right to Work laws are expected to come under fire in the 2019 legislative session and next year’s campaigns, with all 140 members of the General Assembly up for reelection.

This leftward trend could also bring forth calls for other revisions in Virginia’s labor laws, as progressive freshmen lawmakers expand their agenda and broaden their messaging, particularly in light of Amazon’s decision to locate 25,000 jobs in Arlington as one-half of the company’s planned HQ2 project.

Business groups and Republicans have pledged to support Right to Work laws and oppose other measures backed by big labor, such as a “card check” bill ending secret ballot protections for workers in union organizing drives.

Incoming House Democratic minority leader Eileen Filler-Corn (D-Fairfax Station) previously opposed the measure, though she has not indicated whether she agreed with Toscano’s claim that a repeal was neither under discussion nor an active concern.