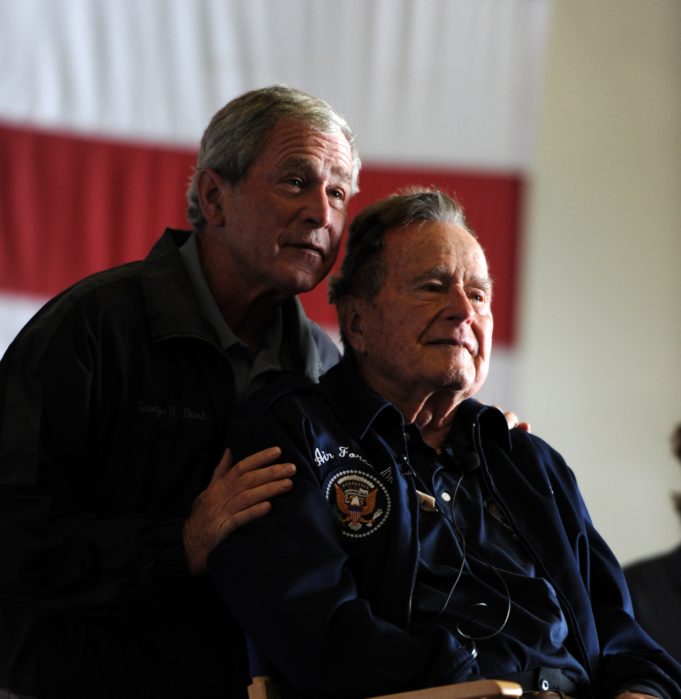 A man remembered from his time as captain of the baseball team at Yale University many decades ago, to his presidency that shaped the world for generations to come, former President George H.W. Bush has passed five months after his 94th birthday. Although he was mostly seen in a wheelchair during the last few years of his life, that did not stop him from skydiving, which he only quit at age 90.

Jim McGrath, a spokesman for the Bush family, released on Twitter a statement from former President George W. Bush, the elder Bush’s son:

“George Herbert Walker Bush, World War II naval aviator, Texas oil pioneer, and 41st President of the United States of America, died on November 30, 2018. He was 94 and is survived by  his five children and their spouses, 17 grand children, eight great grandchildren, and two siblings. He was preceded in his death by his wife of 73 years, Barbara; his second child Pauline Robinson ‘Robin’ Bush; and his brothers Prescott and William or ‘Bucky’ Bush.”

Jeb, Neil, Marvin, Doro and I are saddened to announce that after 94 remarkable years, our Dad has died. George H.W. Bush was a man of the highest character and the best dad a son or daughter could ask for. The entire Bush family is deeply grateful for 41’s life and love, for the compassion for those who have cared and prayed for Dad, and for the condolences of our friends and fellow citizens.”

The spokesman also shared this piece of artwork on his account: 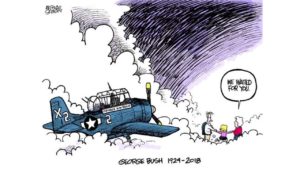 After Bush’s win in the General Election of 1988 following his tenure as vice president to then-President Ronald Reagan, he would help shape world events and lead Western society in the toppling of brutal dictators, leading a global coalition of nations against Iraqi tyrant Saddam Hussein in the Gulf War of the early 1990s.

The Berlin Wall fell with Bush leading where Reagan left off just before Thanksgiving in 1989. The Cold War was put to the end in the latter years of his presidency, marked by a peaceful agreement between the American president and General Secretary Mikhail Gorbachev of the former Union of Soviet Socialist Republics (USSR), which introduced major reductions in nuclear arsenals.

The 41st president was always known and will remain forever known as being one of the most “prepared” people to take over the Oval Office. He spoke of political unity in his 1989 inaugural address, adding that lawmakers and Americans throughout the country should rise above mere partisanship.

Although his long list of accomplishments could not guarantee him re-election in 1992, he had the second-highest presidential approval rating ever — 89 percent — which was beat by his son, the 43rd president, with 92 percent following the destructive terrorists attacks in New York City, Washington, D.C., and rural Pennsylvania on September 11, 2001.

In the world’s reaction to Bush’s passing, President Donald Trump had called for December 5 to serve as a day of national mourning. The commander-in-chief added on Twitter:

“President George H.W. Bush led a long, successful and beautiful life. Whenever I was with him I saw his absolute joy for life and true pride in his family. His accomplishments were great from beginning to end. He was a truly wonderful man and will be missed by all!”