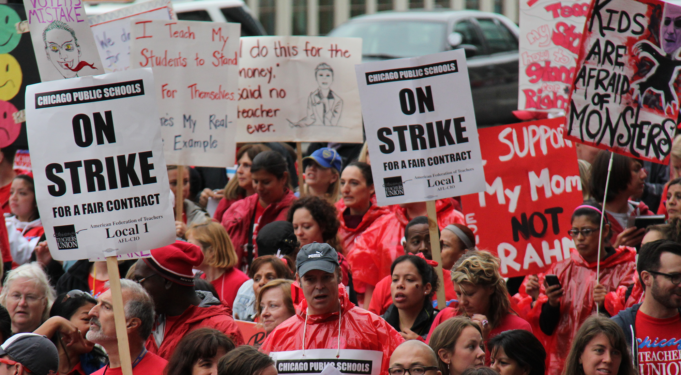 Government employees in Virginia could soon be allowed to go on strike, under the terms of a new bill introduced by Delegate Lee Carter (D-Manassas), who self-identifies as a Democratic socialist.

The legislation, filed as HB1764, would repeal the provision prohibiting unionized government employees from going on strike. Strikes by private sector employees are already permitted by federal law and would not be impacted.

Under Carter’s bill, government employees could walk off the job, closing schools, shuttering government offices, and halting public services ranging from food inspections to wastewater treatment. In effect, union bosses would be given the power to shut down portions of Virginia’s government if their demands are not met.

Earlier this year, such strikes closed all public schools in West Virginia and Kentucky, while shuttering hundreds more in Oklahoma, much to the dismay of parents who were forced to line up last-minute child care.

This potential for disrupting government will spark a contentious debate during the 2019 legislative session. With union bosses investing millions of dollars in Democratic campaigns, pressure on lawmakers is expected to be intense.

Previously, Virginia lawmakers of both parties have opposed public sector strikes as a threat to the orderly functioning of government services. However, as the House Democratic caucus moves leftward, positions once considered too extreme are attracting support from lawmakers aligned with the party’s progressive base, rather than its center.

This shift is exemplified by Carter, who won his 2017 race by embracing the “socialist” label and campaigning on far-left positions, such as imposing government-run health care at the state level, which would result in large tax increases and the cancellation of health insurance plans for all five million Virginians with private coverage.

Passage would represent a repudiation of an eight-decade bipartisan consensus dating from the days of Democratic President Franklin Delano Roosevelt.

Roosevelt, generally regarded as a progressive, pro-union Democrat, drew a distinction between public and private sector unions which he said should be reflected in public policy.

Collective bargaining in the public sector, Roosevelt said, undermined the Democratic process and the ability of the people to set labor policies through their elected representatives.

In a 1937 letter to Luther Steward, President of the National Federation of Federal Employees, Roosevelt wrote:

“All Government employees should realize that the process of collective bargaining, as usually understood, cannot be transplanted into the public service. It has its distinct and insurmountable limitations when applied to public personnel management. The very nature and purposes of Government make it impossible for administrative officials to represent fully or to bind the employer in mutual discussions with Government employee organizations. The employer is the whole people, who speak by means of laws enacted by their representatives in Congress. Accordingly, administrative officials and employees alike are governed and guided, and in many instances restricted, by laws which establish policies, procedures, or rules in personnel matters.”

Roosevelt also warned of the disruptive consequences of public strikes like that envisioned by Carter’s bill, which he called “unthinkable and intolerable.”

“Since their own services have to do with the functioning of the Government, a strike of public employees manifests nothing less than an intent on their part to prevent or obstruct the operations of Government until their demands are satisfied,” Roosevelt continued. “Such action, looking toward the paralysis of Government by those who have sworn to support it, is unthinkable and intolerable.”

Once considered “unthinkable and intolerable” for Democrats, Carter’s bill will come up for a vote during the 2019 legislative session, which convenes on Wednesday, January 9th.