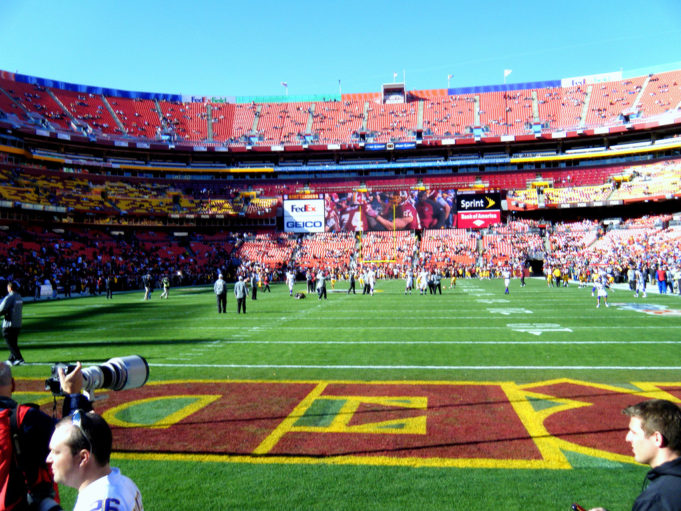 It has always been a bit of a joke that the NFL’s Washington Redskins do not play in Washington, D.C., or in Virginia, where over two-thirds of season ticket holders reside, but in Landover, Maryland. For years, Redskins brass have been planning on building a new stadium, which is still in the early stages as the contract with FedEx Field is not up until 2027. Nevertheless, Virginia Governor Ralph Northam spoke about the potentiality of the new stadium when he visited the Redskins’ training camp in Richmond this week.

“I would say if you look at Virginia, up in Northern Virginia, particularly that area out near Dulles is where they’d look,” Northam said, as reported by the Richmond Times-Dispatch. “But they’ve got to make a decision: Are they going to be back in Washington D.C., Maryland or Virginia? Our doors are open and we’d welcome them.”

Officials in Virginia have lobbied hard to be awarded the chance to house the stadium for the NFL team. Redskins President Bruce Allen has previously stated that the team is targeting a 2027 opening date, the date when the contract in Maryland runs out.

Many are eyeing the replacement of RFK stadium in Washington as a prime target to build the new home of the Redskins, which housed the team from 1961 to 1997 before the move to Maryland. Though, Northam said the Commonwealth has a few things that make it the best place to locate the new stadium.

Speaking to the widespread Redskins fan base: “The first is really inclusivity,” he said. “We welcome people to the Commonwealth. We know we live in a diverse society. So that’s very important.”

“Obviously something else that’s very important for a Redskins fan is transportation,” Northam remarked. As any stadium-goer knows, the worst part about a Redskins home game is the commute home that can last hours even if one leaves the game in the 4th quarter.

“Just this year we put $154 million of dedicated revenue into Metro, so that’s important for the greater Washington area. We’re expanding 395, 495 and 95, the egress is important, we need to get people to and from the stadium,” Northam added.

Currently, the site leading the way in the state is an area of Loudoun County near Dulles International Airport. With transportation in mind, the new Metro silver line would provide great access to the stadium and the surrounding areas. Also, the location would be close to the team’s current Redskins Park headquarters in Ashburn.

“Lastly,” the governor responded, “it’s a great commonwealth. It’s the best state in the country.”

Acting on a motive of his predecessor, Northam also made a bold prediction that the Redskins will be appearing at Mercedes-Benz Stadium in Atlanta, Georgia, for Super Bowl 53.

“We’re going to go to the Super Bowl this year, I hope everybody understands that,” he said. “So mark that on your calendar, the first week of February.”

McAuliffe was 0-for-4 during his tenure as Virginia Governor in predicting Redskins Super Bowl appearances. Furthermore, the Redskins have just three winning season in the last 10 years. So, it is unclear what could be more likely, a Virginia stadium for the Redskins within the next decade, or playoffs.