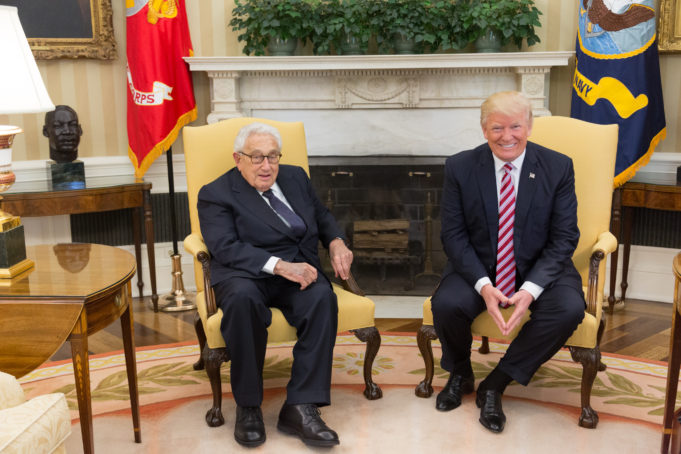 Former Secretary of State Henry Kissinger testified to the Senate Armed Services committee in January about his thoughts on how the Trump Administration and the world at-large should deal with the ever-increasing threat of North Korea’s Kim Jong-Un.

Although he agrees with the aggressive statements President Trump has exclaimed at the communist state, he warned Congress against potential military intervention near Russian and Chinese borders without the world’s support, according to The Diplomat.

The Trump administration has referenced that the North Korean regime would be crossing a “red line” if it developed nuclear capability for its intercontinental ballistic missile program.

Though, experts claim they are very close to implementing nuclear warheads in its missile program. Talks between the two nations via the diplomatic stage have fallen apart recently. Secretary of State Rex Tillerson claims North Korea, “doesn’t seem to understand diplomatic language.”

Kissinger offered his thoughts to Congress on the impending “fork in the road,” in which the commander-in-chief and his administration may utilize tighter sanctions against the regime or even consider a pre-emptive military strike. “We will hit that fork in the road, and the temptation to deal with it with a pre-emptive attack is strong, and the argument is rational, but I have seen no public statement by any leading official,” said Kissinger as reported by PJ Media.

“But in any event, my own thinking, I would be very concerned by any unilateral American war at the borders of China and Russia, in which we are not supported by a significant part of the world, or at least of the Asian world,” Kissinger added.

If North Korea succeeds in building its nuclear arsenal, Kissinger warns that it could ultimately lead to proliferation throughout Asia. U.S. ally South Korea would not want to be the only Korea left without a nuclear device. As well, “Japan will follow suit,” he said.

“Then we’re living in a new world, in which technically competent countries with adequate command structures are possessing nuclear weapons in an area where there are considerable national disagreements,” Kissinger explained. “That is a new world that will require new thinking by us.”

Kissinger recommends that the U.S. work constructively to bring China and Russia in agreement with how to deal with Jong-Un’s North Korea. China, however, undoubtedly has more influence over the regime.

According to a report from Radio Free Asia (RFA) there is an atmosphere of anti-China sentiment throughout the streets of Pyongyang after new sanctions were imposed by the United Nations (UN). In December, the UN unanimously approved the economic punishment of the dictatorial regime after its latest launch of an intercontinental ballistic missile, signalling it may be capable of hitting the U.S. mainland.

In the report, Chinese government officials claim, “North Korea is a time bomb. We can only delay the explosion, hoping that by delaying it, a time will come to remove the detonator.” China is now showing the world it is preparing for an inevitable nuclear war on the Korean peninsula.