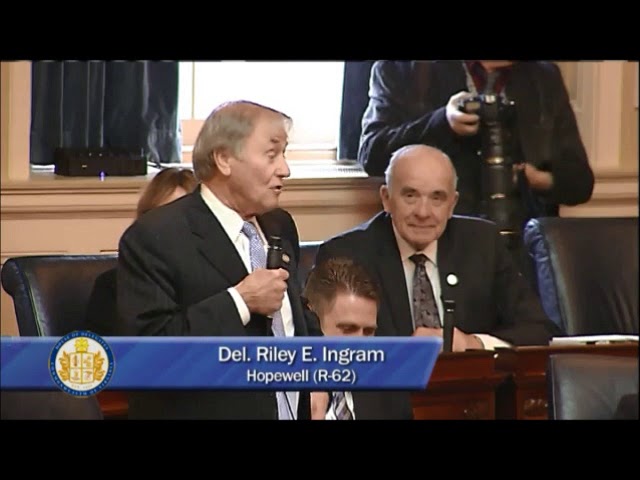 After serving in the House of Delegates since 1992, Delegate Riley Ingram is retiring from the state legislature. The former Hopewell city councilman and mayor and current real estate company owner announced late last year that he would not run for reelection in the 62nd House District.

Speaker of the House Kirk Cox (R-Colonial Heights) said in a press release, “I will forever be grateful for Riley’s service to the Commonwealth in the House of Delegates, and, more importantly I will personally always cherish the friend Riley has been to me.

“Serving in neighboring districts, I was able to see firsthand Riley’s dedication and the deep compassion he had for the people of the 62nd District,” Speaker Cox said. “Riley did great work as the long term chair of the Counties Cities and Towns committee and as chairman of numerous important Appropriations subcommittees.

“Riley’s leadership, dedication, and sense of humor will sorely be missed in the House. I wish him and his family the very best as he enters this next chapter of his life,” Cox added.

Delegate Ingram gave his retirement speech on the floor of the House Wednesday. Typically a time for reflection upon career achievements and thanking family and friends for their support and sacrifice, Ingram instead gave a folksy, unorthodox discourse that had everyone in the House laughing.

The 76-year-old ran through story after story of his 26 years in Richmond, even saying how he and some of his colleagues – in earlier years – “liked to have a toddy on the floor.”

Other stories involved “the Holiday Inn on Franklin Street,” which drew snickering from the House.

“Everything I am saying here is 100 percent true,” Ingram said between stories, drawing even more laughter from legislators.

At the end of his comedic narrative, he thanked his colleagues in the House on both sides of the aisle.

“I find good in everybody,” Ingram said. “I love you all, and I thank you all.”

Following an extended standing ovation, Speaker Cox called Ingram “the most genuine person” and said he was amazed at the level of constituent service Ingram gave during his tenure.

“You’ve been a real credit to this institution,” Cox told him.