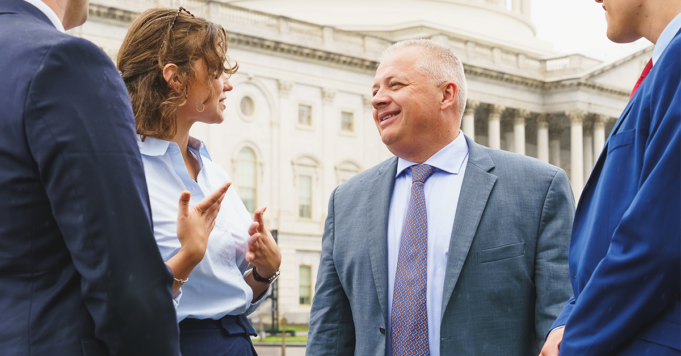 Rep. Denver Riggleman (R-VA) announced the endorsement of the House Freedom Caucus in support of his 2020 re-election bid.  From the press release:

“As the Chairman of the House Freedom Caucus, I am happy to endorse my friend, Congressman Denver Riggleman, for reelection. Denver has fought together with the Freedom Caucus on the issues that matter most and has always stood up for Americans’ Constitutional rights,” said Congressman Biggs. “He is a trusted partner of mine and a strong ally. During his time in Congress, I have found him to be a true patriot who has voted to secure our border, keep our national debt in check, and our economy strong. His military and entrepreneurial experience coupled with his unwavering commitment to individual freedom and limited government make him an ideal representative for Virginia’s Fifth District.”

Recently, members of the House Freedom Caucus were responsible for the now-infamous “SCIF Raid” involving Speaker Nancy Pelosi’s makeshift and unofficial impeachment “probe” designed to build the case against President Trump regarding $400 million of military aid authorized by Congress.

One small problem?  Even Politifact (known for their left-leaning bias) has questioned the impartiality of the process.  Under Nixon and Clinton, it was House Judiciary that conducted the questioning, whereas under Pelosi it will be House Intelligence Committee that conducts the investigation, while House Judiciary merely passes sentence on whether the findings rise to the level of an impeachable offense — hardly fair play.

At present, neither House Republicans nor the White House will enjoy the same subpoena power as the opposition party did in either 1974 or 1998.

Nevertheless, Riggleman’s efforts to help expose this sort of double dealing by House Democrats in Washington have proven to be valuable and consistent with Riggleman’s commitment to fair play.  Long may it last.