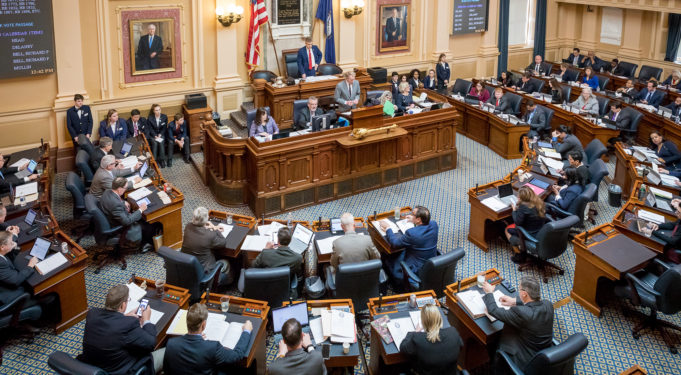 This week, interviews with Dr. Vanessa Tyson and Meredith Wilson, two women who have levied sexual assault and rape allegations against Virginia Lieutenant Governor Justin Fairfax (D), have aired on national television. Just days before their release, however, Fairfax attempted to counter the highly-emotional stories by releasing two polygraphs tests, which his attorney asserted that they prove the “allegations are false and that he engaged in no wrongdoing whatsoever.”

Almost two months removed from the developments following the announcement of the first sexual assault allegation, Speaker of the Virginia House of Delegates Kirk Cox (R-Colonial Heights) reminds people that while “Republicans are seeking a bipartisan hearing; Democrats in the House of Delegates are refusing to allow that to happen.”

Fairfax is alleged to have sexually assaulted Dr. Tyson in a hotel room at the 2004 Democratic National Committee conference in Boston, Massachusetts. She came forward with her account of the incident in very graphic detail in early February, which was reported by the New York Times.

In an interview that aired Monday with CBS This Morning‘s Gayle King, Dr. Tyson said tearfully, “In my ideal world, I’d want him to resign. The Virginia people need to know who it is that they elected. They need to know.”

The following day, Wilson, the second woman to accuse Fairfax of sexual assault, said during her interview with King that the “#MeToo movement” gave her hope to come forward. “There’s this expectation that we [black women] are supposed to protect our black men at all costs, and there’s been this idea that…it’s just something we’re supposed to grin and bear.”

In 2000, while Fairfax was a senior at Duke University, Wilson, a junior at the time, claims that Fairfax raped her in a “premeditated and aggressive” fashion. She came forward just days after Dr. Tyson.

Fairfax has ignored the widespread calls for his resignation from nearly every member of Virginia’s Democratic Party, and has adamantly expressed that he is innocent, calling the allegations “false and unsubstantiated” and a “totally fabricated story.” He even went as far to say “f*** that b****” in a closed-door meeting with his staff as he tried to discredit Dr. Tyson, which was caught by an NBC News correspondent.

On Tuesday, Speaker Cox (R-Colonial Heights) released a statement regarding the potential for a legislative hearing on the sexual assault allegations against the lieutenant governor.

“For the last two days, we have watched excruciating first-hand accounts from two survivors of sexual assault who allege that Lt. Governor Justin Fairfax assaulted and raped them in separate incidents in the early 2000s,” he said.

“Over the course of the last few weeks, we have communicated with attorneys representing Dr. Vanessa Tyson and Ms. Meredith Watson,” Cox added. “Through those conversations, they have told us that Dr. Tyson and Ms. Watson are prepared to share their accounts at a legislative hearing, but only if there is bipartisan cooperation to conduct the hearing.”

In February, House Republicans were working towards a bipartisan plan of action to give the two accusers an opportunity for a hearing, which would also grant due process for Lieutenant Governor Fairfax. Cox explained that the legislature was set to “establish a bipartisan subcommittee of the House Courts Committee with an equal number of members from both parties,” but said “our Democratic colleagues stated their opposition to a hearing.”

“The Courts of Justice Committee would schedule a special subcommittee meeting where Dr. Vanessa Tyson, Ms. Meredith Watson, and Lieutenant Governor Justin Fairfax would be invited to attend and provide testimony and other evidence,” the letter read.

The 11 points Delegate Bell outlined in the letter are as follows: 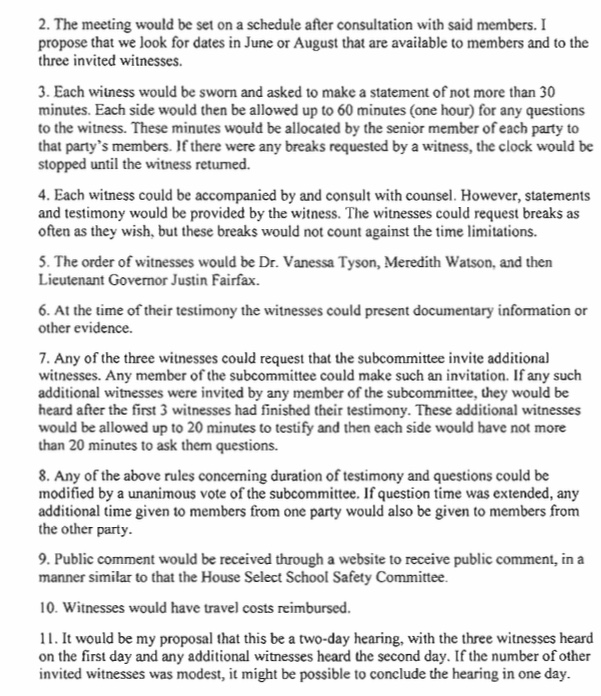 Bell said in his letter that he hoped the proposal “would provide the bipartisan path forward” that the survivors are seeking, and said he would welcome “any counter-proposal that would create a bipartisan process to allow the three witnesses to testify, present evidence, and answer questions.”

“The goal is to allow all three a chance to be heard and taken seriously, as requested,” he added.

“Unfortunately,” Speaker Cox continued in his statement, “despite the compelling accounts we have heard from Dr. Tyson and Ms. Watson on television in recent days, Delegate Filler-Corn has made clear that she will not agree to a bipartisan General Assembly hearing of any nature.”

In a letter to Bell, she said, “we do not believe that the House of Delegates, or any selection of legislators, is the appropriate body to hear these serious allegations.”

Delegate Filler-Corn emphasized in her letter the fact that a legislative hearing “regarding criminal allegations against an elected official would be unprecedented in Virginia.” She said that the Democratic Party is “concerned that enacting the plan that you [Delegate Bell] have proposed would establish an ill-defined precedent for the future, which could be abused,” deferring to pursue a “third party entity” to conduct the hearing.

“Dr. Tyson and Ms. Watson have said that they rightfully do not want their stories turned into partisan fodder and we wholeheartedly agree,” he said. “Unfortunately, it appears that two survivors of sexual assault will be denied an opportunity to be heard in the bipartisan hearing they are requesting solely because Democrats in the House of Delegates are refusing to participate.”

Regardless, the speaker said, “We stand ready to proceed, and hope that our Democratic colleagues reconsider the consequences of their decision.”