Whoever said “fake it ’til you make it” probably wasn’t talking about using fake law enforcement officers in a political campaign.

Barnett is making his second run at Republican Del. Roxann Robinson, the incumbent in the 27th House District, contained entirely in Chesterfield County.

Behind in the polls and looking for a way to compare himself to Robinson’s record, Barnett’s campaign sent out a mailer and is airing a TV ad attempting to fool voters and make them believe that the Chesterfield Police Department has endorsed his campaign.

Off course that is a lie, the Police Department doesn’t endorse candidates or attend political photo ops with candidates.

The photo showing Barnett ‘working’ with law enforcement was staged with fake cops.

Unlike Democrat Jennifer Wexton’s fake cops fiasco last year, Barnett was smart enough to keep the faux officers facing away from the camera. But the camera shows more than enough to figure out that the uniforms in question are fake.

The shoulder patch is a dead giveaway. Police insignia are often unique to departments, and virtually always carry the name of the officer’s department. 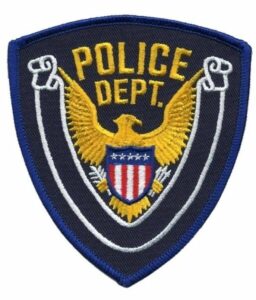 It didn’t take a great deal of sleuthing to find the shoulder patch in question: a generic patch available on Ebay for $3.95.

Even worse for Barnett, the Chesterfield County Police Department has long been known for their green uniforms — with a history that dates back to Prohibition.

The department rolled out new darker uniforms in April, but as this video makes clear, they certainly don’t look anything like the uniforms in Barnett’s mail piece or video.

The Times Dispatch reported on the department’s last major insignia change in 2014 — which looks nothing like the Ebay version worn in Barnett’s mail piece.

If he’s willing to be dishonest about something as simple as a photo with police, what else is Larry Barnett lying about?