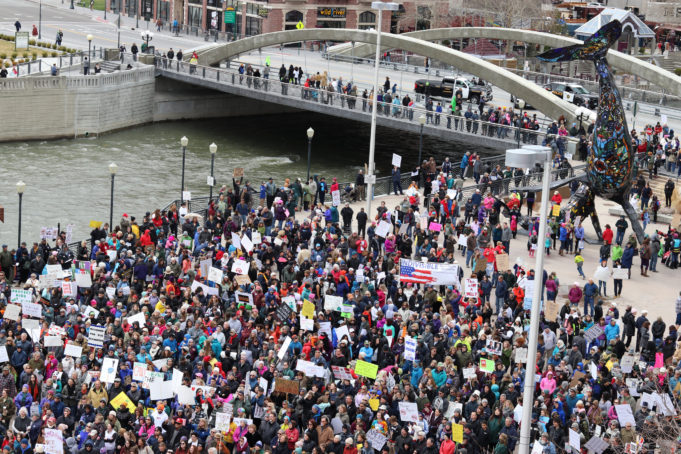 Over the weekend, thousands of gun control activists filled the streets of Washington D.C. and other large cities across America to show their solidarity for the victims of recent school shootings and express their disgust for elected officials who protect the Second Amendment. However, this is quite a precarious situation as it seems that the nation’s youth who gathered under the guise of the March for Our Lives are now being used to forward the progressive agenda that is not as inclusive as one is led to believe.

Of course, 17 students being gunned down in a school in Broward County, Florida is a terrible event in the nation’s history – there’s no arguing that. The depressing nature surrounding the incident should not be trivialized or politicized. Children should not be used as cannon fodder for policy agendas or be used as material on which to build an electoral platform.

Unfortunately, dysfunctional and distempered politics is the only kind of governance most of these young protesters have ever known since their birth after the turn of the century. Therefore, the anger stemming from their environment has ignited a clear liberal motive of gun control that is set to inspire a larger vote.

The notion of resistance has become a way of campaigning. On the most recent stage of the March for Our Lives, it is opposing any measures that protect a law-abiding citizen’s constitutional right of owning and bearing a firearm.

Even though another school shooting was prevented from reaching critical mass casualty levels in Maryland at Great Mills High School last week after an armed resource officer apprehended a student with a handgun, progressive protesters do not believe well-trained law enforcement officers in school is the answer. That action does not fit the larger narrative. Presumably, that is why the incident lacked nearly any media coverage.

When it comes to people killed by firearms in the U.S. it seems that marches, rallies, and hours upon hours of coverage on nightly news cycles are only organized when the hands of the political elite are behind them. Nevertheless, gun violence is no new issue in America. In some communities, people being shot is a daily occurrence and sadly “business as usual.”

This begs the question: why is there not a national outcry for the people being gunned down every weekend in Chicago, Atlanta, Los Angeles, Baltimore, Detroit, and other American cities?

It seems the aftermath of gun deaths in America only deserve a resulting conglomeration of activists, elected officials, and media pundits when they happen in affluent areas. Areas that are populated by (you know who).

In his F-bomb-laced tirade in Washington, David Hogg, a student-turned-activist from Marjory Stoneman Douglas High School in Parkland said, “96 people die every day from gun in our country.” It is interesting that gun control activists, when it serves their purpose, included those killed in poor areas in the U.S. when they want to promote their agenda, but fail to forward any call of action where those lives are taken.

The interest in real results is lacking. Progressives are not interested in the combined justice for those gunned down in senseless violence. The March for OUr Lives was not about saving lives; it was about promoting the left’s agenda.

The strategy from Democrats is to categorize people – white, black, rich, poor, urban, rural, hetero-normative, and all those in the initialism of LGBTTQQIAAP.

Divide and conquer is the strategy being used for the furtherance of the anti-liberalism, liberal left. They enjoy using each group to their political advantage, gaining what they really want – power.