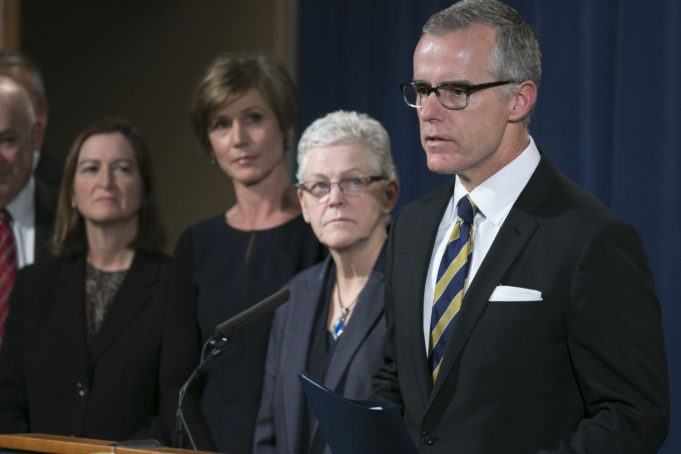 On Monday morning, FBI Deputy Director Andrew McCabe resigned from the bureau in what some are characterizing as “stepping aside,” according to a report from NBC News. Though, McCabe will stay on FBI payroll to retire in March with full benefits.

There has been a constant tension between the FBI and the Trump Administration since the president took office. President Trump is also not a big fan of McCabe according to what he has taken to Twitter to voice.

Just after the president fired James Comey last year, he invited McCabe to the White House and asked him how he cast his ballot in the 2016 presidential election. This followed the meeting Trump had with Comey before his firing and asking the then-director about his loyalty in regards to the president.

Under the recent tutelage of McCabe, the FBI has been subject to allegations, along with insiders from DOJ, that anti-Trump operatives are working against the current administration in Washington. Last week, Republicans in Congress were made aware of text messages sent between Peter Strzok, former Chief of the Counterespionage Section for the FBI and his mistress Lisa Page, also and agent for the bureau. Attorney General Jeff Sessions has vowed to ensure an investigation following the studying of the messages by Congress that show a clear anti-Trump bias and language that alleges that there may be a “secret society” working against the Trump Administration.

Trump has been critical of McCabe since the 2016 election, defined through his distrust of the FBI. McCabe, who has worked under Special Counsel Robert Mueller and James Comey, took heat from the president after he arranged the FBI’s interview with then-National Security Adviser General Michael Flynn. The meeting resulted in the general’s firing from the administration after making false statements regarding the investigation over collusion with Russian officials during the election.

Late last week, White House spokesman Raj Shah downplayed questions referencing the pressure from Trump to fire McCabe by explaining the president, “believes politically motivated senior leaders…have tainted the agency’s reputation for unbiased pursuit of justice,” and that the new director the president appointed will, “clean up the misconduct at the highest levels of the FBI,” according to the report.