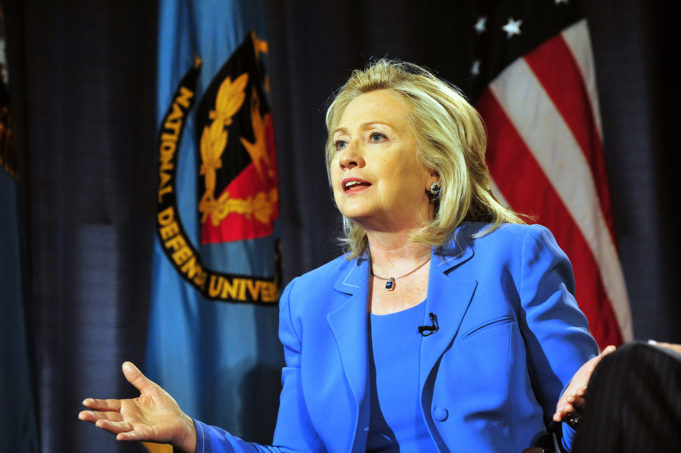 It has become apparent over the past few years how far those in the mainstream media will go to protect fellow liberal Democrats. In fact, a major implication for one of their own happened last week, but it was never covered. A lawsuit was filed in a D.C. district court has now exposed an $84 million money laundering conspiracy by Hillary Clinton and the Democratic National Committee (DNC) during the 2016 presidential election.

Of course, the people who did not report any of this are the same that relished in each other’s joy after the Democratic National Committee’s Racketeer Influenced and Corrupt Organizations (RICO) Act lawsuit was filed against the 2016 Donald Trump campaign, WikiLeaks, and Russia last week.

According to The Federalist, the lawsuit alleges that the Clinton campaign and the DNC violated federal campaign-finance law.

During an election cycle, an individual donor can contribute $2,700 to any candidate, $10,000 to any state party committee, and $33,400 to a national party’s main account. Primaries, runoffs, and general elections are considered separate elections.

Groups can get together and take a single check from a donor for the sum of those contribution limits, it being legal because the donor cannot exceed the base limit for any one recipient. As well, state parties can make unlimited transfers to their national party.

The “legal loophole” allows for wealthy donors to give hundreds of thousands of dollars by filtering the funds to and through national committees.

Dan Backer, a campaign-finance lawyer and attorney-of-record in the lawsuit said he suspected that the DNC had exceeded the aforementioned limits and began reviewing Federal Election Commission (FEC) filings to determine whether there was excessive coordination between the DNC and Clinton.

He found that there was, “extensive evidence in the Democrats’ own FEC reports, when coupled with their own public statements that demonstrated massive straw man contributions papered through the state parties, to the DNC, and then directly to Clinton’s campaign – in clear violation of federal campaign-finance law.”

On December 15, 2017, Backer filed an 86-page complaint with the FEC, charging them to, “commence enforcement proceedings against Hillary Clinton, her campaign and its treasurer, the DNC and its treasurer, and the participating state Democratic committees,” according to the report.

The complaint stated, “‘During the 2016 presidential election,’ the Hillary Victory Fund (HVF) was established ‘as a joint fund-raising committee to accept contributions from large donors, some exceeding $400,000.'”

To fully comply with campaign-finance law, the HVF must transfer donations to specified recipients, whether it be the Clinton campaign, down-ticket Democrats, the DNC, or subsequent state committees. However, several high-dollar contributions were reported as received by the HVF, “and the same amount on the same day recorded as received by the DNC from a state Democratic committee, but without the state Democratic committee ever reporting the contribution.”

The lawsuit cites 30 separate occasions on which the HVF transferred contributions totaling more than $10 million to the DNC without any corresponding record of the receipt or disbursement from the state parties.

The report states, “of the contributions state parties reported as received from the HVF, 99 percent wound up at the DNC. They were transferred immediately or within a day or two, raising questions of whether the state Democratic committees truly exercised control over the money – something necessary under campaign finance law to allow a later-legal transfer to the DNC.”

As many may remember, the Clinton campaign had full control of the DNC and their control of donations did not end with disbursement. Former DNC Chairwoman Donna Brazile even acknowledged that as Clinton’s campaign, “gained momentum, she ‘resolved the party’s debt’ and ‘expected to wield control of its operations.'”

This, of course, is coming from the woman who publicly admitted and write a book about how Clinton rigged the DNC’s nomination process.

So, if anyone’s mind still wasn’t made up about the media – there you go. Maybe if Stormy Daniels had any part to do with the $84 million in money laundering, the media would have covered it.