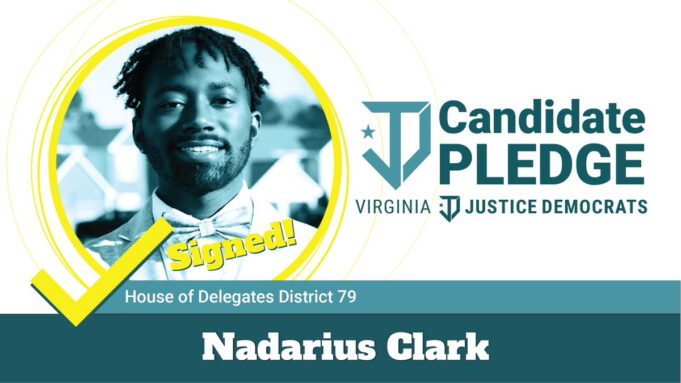 The buzz in the media is palpable. House Democrats have shed all their crazies and moved toward the center! The socialist is gone, as is the author of the “assault weapons” ban and the conscience clause repeal.

So what do we know about their replacements? Well, one is a socialist, one supports an assault weapons ban and the repeal of the conscience clause.

Let’s look at some of the newly nominated Democrats.

In Hampton Roads, we have Nadarius Clark, proudly endorsed by the Tidewater Chapter of the Democratic Socialists of America. Clark hasn’t called himself a socialist outright as of yet, but he does stand for one of the biggest socialist priorities — government takeover of health care.

“Nadarius knows medical and health care is a fundamental right, and that it must be made available to every citizen under a universal, single payer program.”

“Four of the top ten highest eviction cities in America are found in the Hampton Roads area. Nadarius believes we need statewide rent control and stronger investments in public housing.”

Clark wants you to join a union. Or else:

“In particular, Nadarius will fight to repeal Virginia’s disastrous Right to Work laws and join other states like Maryland in establishing a $15.00 an hour minimum wage.”

If you were a fan of Mark Levine’s positions, you may have found a new favorite Delegate, although it’s not entirely clear that she has a real grasp of the issues. From her website:

“It’s also crucial that we repeal the conscience clause that allows people to deny TLGBQ+ couples the opportunity to adopt children.”

That’s not what the conscience clause does, but who are we to stand in the way of a good rant?

She’s also all in on Mark Levine’s gun control proposals, even if she doesn’t quite understand either them or existing law:

“I support a ban on assault weapons, mandatory background checks on gun sales, and a ban on ghost guns, which are 3D-printed plastic guns without serial numbers that cannot be detected by metal detectors.”

There’s more wrong in that statement than we can go into here. But it is illustrative of where she’s coming from.

Last but not least is Elizabeth Bennett-Parker, who has picked up the mantle of being anti-law enforcement and pro-criminal. From her website:

“As your Delegate, she will work to abolish mandatory minimums, end cash bail, reform pre-trial detention, increase funding for public defenders, limit citizen interactions with the police and the criminal justice system, and ensure voting rights.”

Those are just the highlights. Meet the new Democrats, same as the old Democrats. Same far left policies, new faces.