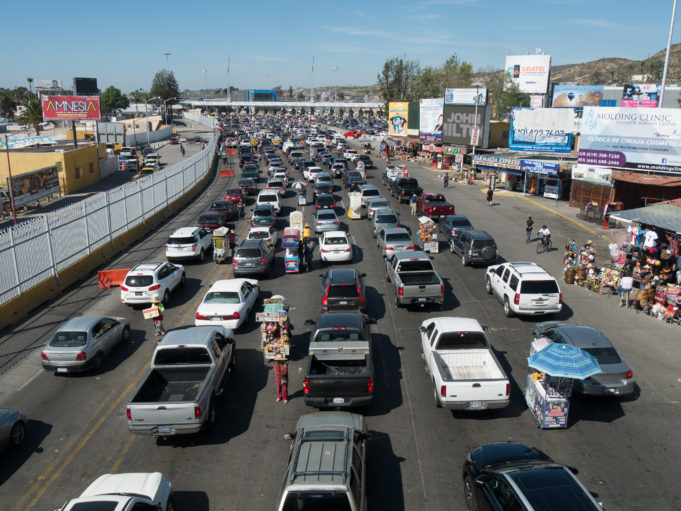 As thousands of Central American migrants remain encamped in temporary shelters outside the U.S.-Mexico border awaiting asylum, another migrant caravan is preparing to begin its journey from Honduras towards the north in the direction of the U.S. The Los Angeles Times reports that a group 15,000-strong is preparing to leave the embattled, poverty-stricken country on January 15, 2019 – the largest caravan in recent memory.

However, the group may not be going directly towards the U.S.-Mexico border, where migrants who were told by caravan organizer Pueblo sin Fronteras that “getting into” the U.S. would be “easy.” The camp a few hundred feet from the El Chaparral border crossing in Tijuana has reached a breaking point, with violence in the streets sparking over the large presence of migrants living in makeshift shacks and tents as they await a long asylum process.

Though, the beginning of a deal between the U.S. and Mexico may deter Central American migrants from traveling all the way to the U.S. – actually convincing them to stay in Mexico.

A majority of the migrants are said to now have their sights set on the southern portion of Mexico in the states of Chiapas and Oaxaca to find work after the newly-installed Mexican President Andrés Manuel López Obrador pledged to dole out work visas for Central American migrants. Part of an $8 billion project that includes linking cities in three Yucatan Peninsula states, it is expected to create hundreds of thousands of jobs and improve infrastructure in the regions.

Furthermore, the project may act as an immigration buffer just south of the United States as the two countries agreed to develop a plan to curb Central American migration last week. The plan includes a $25-billion investment from Mexico into its southern states over the next five years. The U.S. will contribute $4.8 billion to Mexico and $5.8 billion to the Northern Triangle of Central America, which includes Guatemala, Honduras, and El Salvador, with funding allocated from existing aid programs.

A news release from the U.S. State Department says that both the U.S. and Mexico have pledged to create a “zone of prosperity” in these two regions to “secure Central America to address the underlying causes of migration, and so that citizens of the region can build better lives for themselves and their families at home.”

In late January 2019, government officials from the two countries will come together in a cabinet-level meeting to agree on a strategic framework, following the Mexican government announcing its approach to the migration program, which is in great contrast with the American approach. Mexico will expand humanitarian and visitor visas for the Northern Triangle countries, strengthen their capacities to handle migrants and asylum seekers, and developing regional economic plans to ward off illegal immigration, among other things.

Since over $1 million in trade crosses the shared border every minute, commerce will be important to cementing a better relationship with Mexico – the world’s 15th largest economy – to tackle the Western Hemisphere’s migration crisis. Although U.S.-Mexico relations have been a bit rocky since President Donald Trump took office, the fact that both countries are working to address the migrant flows from Central America – and are finding solutions despite their political and cultural differences – it deserves strong support.