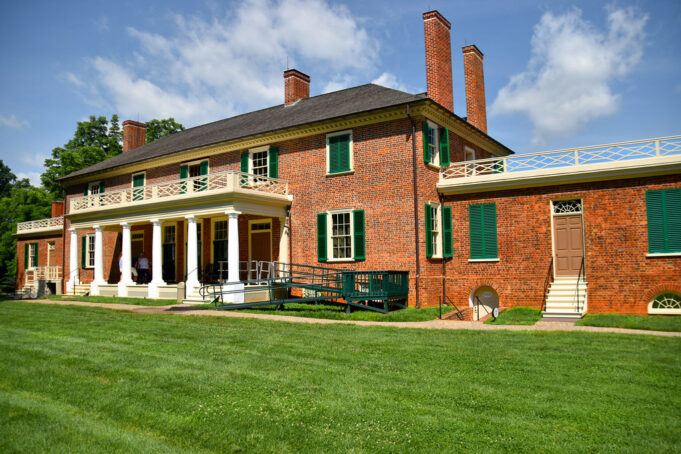 The Montpelier Foundation announced last week that they successfully won a National Endowment for the Humanities (NEH) grant to study the overseer’s house at James and Dolly Madison’s plantation home.

The $250,000 award from the NEH will be used to subsidize “(f)ield research on the overseer’s house at James Madison’s Montpelier leading to public programs and publications on the social, economic, and racial complexity of nineteenth-century plantations in the United States.”

This is really important for two critical reasons.

First and foremost, Montpelier has undergone a dramatic transformation from the DuPont era, where archaeologists and historic preservationists have painstakingly restored the home bit by bit to bring it to the time of James and Dolly Madison.  Additions have been removed, wallpaper rediscovered, and interiors painstakingly restored — and by painstakingly, I mean with forensics that would make NCIS blush for shame.

These guys are that good.

Second and perhaps more importantly is the legacy of James Madison as both a thinker and a Virginian.  Many will recognize him as the Father of the Constitution.  Many others will recognize him as part of the triumvirate that wrote the Federalist Papers.  Few will remember him for the part he played in enshrining slavery into the Virginia Constitution of 1830 where — though expressing sympathy for black slaves — did little but offer a continuation of the status quo.

What is more significant are the lengths to which the Madisons attempted to present slavery as a benign institution.  Much of what we think slavery was is viewed through what survives — small cabins, tenements, or well built homes like what one might see along Mulberry Row at Monticello.  Madison was sensitive to critiques from friends such as the Marquis de Lafayette, and visitors to Montpelier and Monticello alike would be greeted by clean, well constructed if modest homes that their servants lived in.

…the house servants, that is.  From The Washingtonian:

“Where are my people?” Ford asked the site’s chief archaeologist, Matt Reeves. “You spent $24 million on the Madisons, and all my people get are dead grass and railroad ties?”

She didn’t realize it then, but her statement helped set into motion a nearly ten-year process of reviving the enslaved community’s history and building it into the landscape. More than 100 slaves toiled for the father of the constitution and his wife, Dolley, while they lived at Montpelier. Six generations were born into slavery there.

Of course, what we see of slavery at Montpelier is what the Madisons wanted us to see about slavery.

Imagine the likes of the Marquis de Lafayette on his 13-month tour of America arriving to the likes of friends such as Jefferson, Madison and Monroe and seeing the condition of black slaves.  Imagine the willingness of these same men to attempt to present themselves as caretakers of the involuntary labor of others; not as prominent slavemasters.  Imagine as well a history erased, as such sites were cleared and removed after their use as both housing and propaganda expired…

After I finished touring the exhibit, I sat with descendant Rebecca Gilmore Coleman under a large tree in Madison’s backyard. Coleman, 76, had recently had knee surgery and was getting drove around in a golf cart to see the exhibit’s progress. She had kind eyes and a coiffed bob.

[O]ne day he took her to the cabin and told her everything he knew. Coleman says that changed her life. “It felt like, oh man I know who I am,” she says. “You felt as though all these years you really didn’t know yourself. I really didn’t know myself.”

Every time she goes back to that cabin, Coleman feels the weight of her past.

“When I go to the front porch, the feeling of George standing on that front porch comes over me—overlooking those beautiful Blue Ridge mountains,” she says. “And I say, you know, ‘George stood here,’ and he….”

Between breaths, she started to cry. “I’m looking at what he looked at back in the 1800s. That makes me feel even more of a part of Montpelier.”

The overseer’s house at Montpelier represents a critical link in the chain between master and slave — a painful one at that.  Telling that story as one might imagine it to be can be left to the writers and historians, but the archaeological excavations that will inform us all put more than context to the emotions… they add evidence that such history can never be truly erased, only blanketed in earth for a time.

For those truly interested, Montpelier offers a fantastic tour of the grounds that really opens up how the apparatus of the plantation society worked, and in the context of those who worked the soil rather than those who owned the lives and labor of James Madison’s Montpelier.