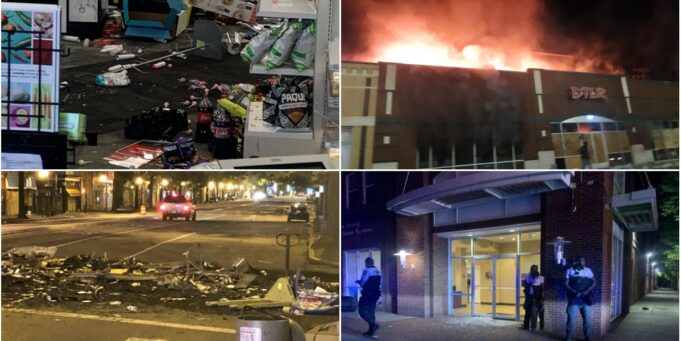 Governor Northam held a press conference on Thursday, and he had a message for those who would bring violence or riots to the Virginia Capitol.

“Violence has no place here or in Washington. Free speech is a value we all hold dear, but violence is something else entirely,” he said.

Violence would not be tolerated, and Virginia was ready for any who stepped out of line.

“If you’re planning to come here or up to Washington with ill intent in your heart, you need to turn around right now. You’re not welcome here, or in our nation’s capitol. If you come here and act out, Virginia will be ready,” he said.

Those in the audience could be forgiven if they thought Northam had been abducted and replaced with a body double. Just a few months before, Northam was doing his best to roll out the red carpet for rioters in downtown Richmond.

“To the protestors who are out in Richmond and other parts of the commonwealth: I hear you, I am with you, I pledge to stand by you,” Northam said in early June. “I can not know the depth of your pain right now, but I can stand with you and support you and together we’re going to turn this pain into action. “

Rioters did millions of dollars of damage to businesses and government buildings in downtown Richmond. A new GRTC Pulse bus was torched. Businesses were looted and burned. A number of people were arrested and charged with rioting.

And Ralph Northam has yet to condemn the violence. Even at his press event on Thursday, said there was “no comparison” between June in Richmond and January in Washington, D.C.

Both saw a violent crowd descend and do damage. Both saw violence against police. Both saw extensive property damage. There is indeed a comparison — they were both violent riots, and they should both be condemned.

If political violence is bad in January, it is bad in June. The fact that Ralph Northam can’t bring himself to say that says as much about him as the actions of the thugs who rioted in Richmond and Washington says about them.