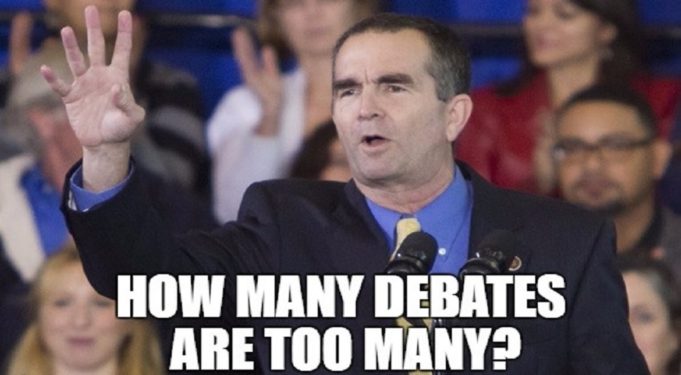 Ralph Northam has gone Richmond, and the Hampton Roads press is starting to complain about it.

Northam represented Norfolk and the Eastern Shore (back when the Democrats liked gerrymandering) in the Virginia Senate. But that was before he became Lt. Governor and decided Richmond and parts further north are worth more of his attention than Norfolk, Virginia Beach, Chesapeake, Newport News, Hampton….you get the idea.

The Virginian-Pilot, a Hampton Roads newspaper who hasn’t endorsed a statewide Republican for as long as I can remember, isn’t thrilled with Northam’s shunning of Hampton Roads.

“As the nation’s political eyes turn toward Virginia and the gubernatorial race sure to dominate headlines this fall, it would be nice if Hampton Roads could share in that spotlight and if issues of pressing concern here were not given short shrift.

“What a shame we’ve been overlooked yet again.”

And it’s not Gillespie’s fault.  Gillespie is all in, but he’s alone.  Northam rejected a Hampton Roads debate.

Northam campaign’s response?   Stream it, and you should be happy that you can watch online.

“Northam’s campaign communications director David Turner replied, ‘…He looks forward to the debate in September, which will be televised and streamed across the commonwealth.’”

Voters throughout Hampton Roads should take this as a sign of how much, or truthfully how little, Ralph Northam cares about Hampton Roads.  He agreed to a Northern Virginia debate in a Richmond minute.

Just not one for those of us who live in the place he used to call home.

Guess I have to keep my home WiFi.  That seems to be the only way I’ll see Virginia’s Democratic candidate for Governor in a debate.