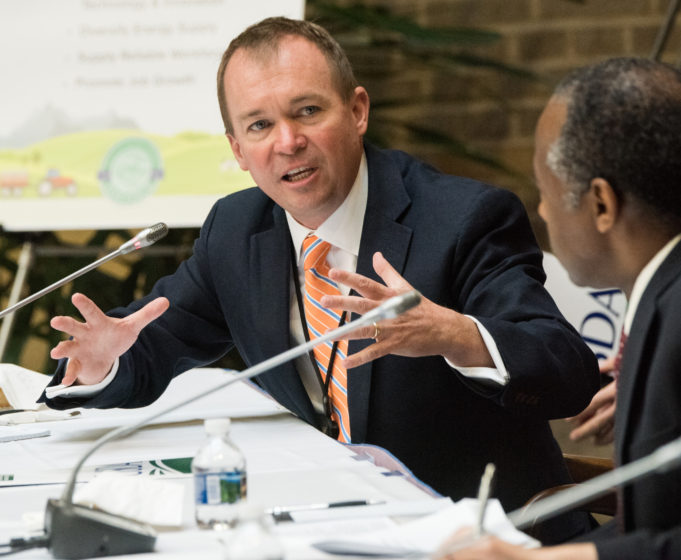 Reports are indicating that President Donald Trump will select Director of the Office of Management of Budget (OMB) Mick Mulvaney as the “acting” senior White House aide as the current Chief of Staff John Kelly will exit at the year’s end. Since the infamous post-midterm election press conference, the President has downplayed claims that Kelly and himself have not been on speaking terms.

“I am pleased to announce that Mick Mulvaney, Director of the Office of Management & Budget, will be named Acting White House Chief of Staff, replacing General John Kelly, who has served our Country with distinction,” Trump tweeted. “Mick has done an outstanding job while in the Administration….

….I look forward to working with him in this new capacity as we continue to MAKE AMERICA GREAT AGAIN!”

There have been speculations that Nick Ayers, the 36-year-old chief of staff to Vice President Mike Pence was to take the job. Advisers Ivanka Trump and Jared Kushner advocated for Ayers, but he did not take the job offer, explaining that he could not give Trump the two years he wants. Regardless, there were rumors that at least 10 people were on the list for Kelly’s successor.

On Thursday, President Trump met with former New Jersey governor Chris Christie for the job of White House chief of staff. Christie, who was an adviser to Trump during the end of his 2016 presidential run and during the White House transition period, has been on the list for several key administration positions in the past, but has yet to be selected, withdrawing his consideration Friday.

Some within the Trump Administration are told to have reached out to the President to suggest Kushner, his son-in-law, for the post. He has been close with the President in his official policy capacity since the rollout of his campaign in 2015. Kushner has had a number of successes, such as helping negotiate the new NAFTA replacement, the U.S.-Mexico-Canada Agreement (USMCA), and advancing prison reform legislation which edges closer towards the President’s desk.

President Trump has not indicated whether Mulvaney will remain as director of OMB, or how long he will serve in an “acting” capacity. The former South Carolina congressman has been part of the Trump Administration’s deregulatory push since joining as chief budget officer. Mulvaney has also served as acting director of the Consumer Financial Protection Bureau while simultaneously running the White House budget office.