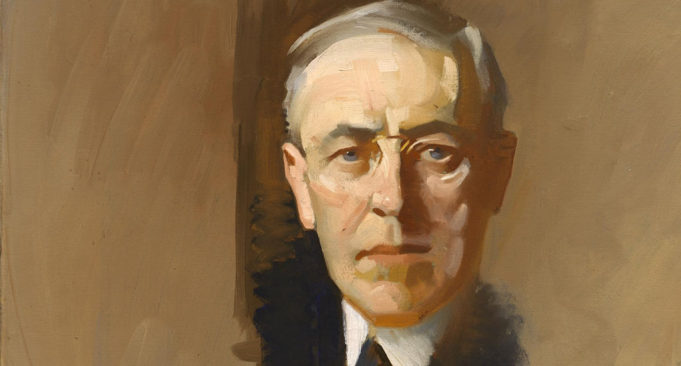 Only a peace between equals can last. Only a peace the very principle of which is equality and a common participation in a common benefit. The right state of mind, the right feeling between nations, is as necessary for a lasting peace as is the just settlement of vexed questions of territory or of racial and national allegiance.

There are a number of parallels to draw from the pointlessness of the First World War and the perennial infighting that has plagued Virginia Republicans for the last 15 years.

For starters, Wilson’s speech above is worth reading in its entirety, not just for the sake that this was a time when thoughts had to be well crafted, but to see how Wilson was navigating the headwaters between the moral case for the Allies versus a deeply divided (and in many cases, pro-German) sentiment among the working classes who hailed from German and Irish ancestry.

The First World War was bloody and pointless, with the flower of a generation of young men trampled by the bloody boot of war.  The “victor’s peace” that followed only served to create a twenty-year truce that consumed 50 million lives on top of the 30 million snuffed out by the first war.

If there is a thesis that European rivalries sent European powers across the oceans for greater resources to win their factional wars back home (Paul Kennedy asserts this in a fantastic one-volume called The Rise and Fall of the Great Powers), one has to wonder how Europe would have been shaped differently had these rivals built up rather than out.

In Virginia, most pundits and prognosticators (and party leaders) are searching for answers amidst the failure.  Once again, we are treated to a replay of 2017 — Republican turnout is higher; Democratic turnout is higher still.

Some voices are calling for “unity” without reform.  Others are insisting on Jacobin-style executions until the morale improves.  Already there are grumblings and promises of primary challenges — more money wasted while the Democrats continue to pick off Republicans on the periphery.

Yes, we do have a problem with the alt-right hiding in our midst.  One must imagine that the Democrats have similar problems with Antifa in their ranks — and are far more reticent to talk about their problem than we are about ours.

But already we are seeing inklings of the Democratic agenda in Washington, and promises of more to come should the Democrats take the General Assembly in 2019:

Don’t let the geographical sea of red fool you on traditional maps.  This is the actual map of the Virginia electorate: 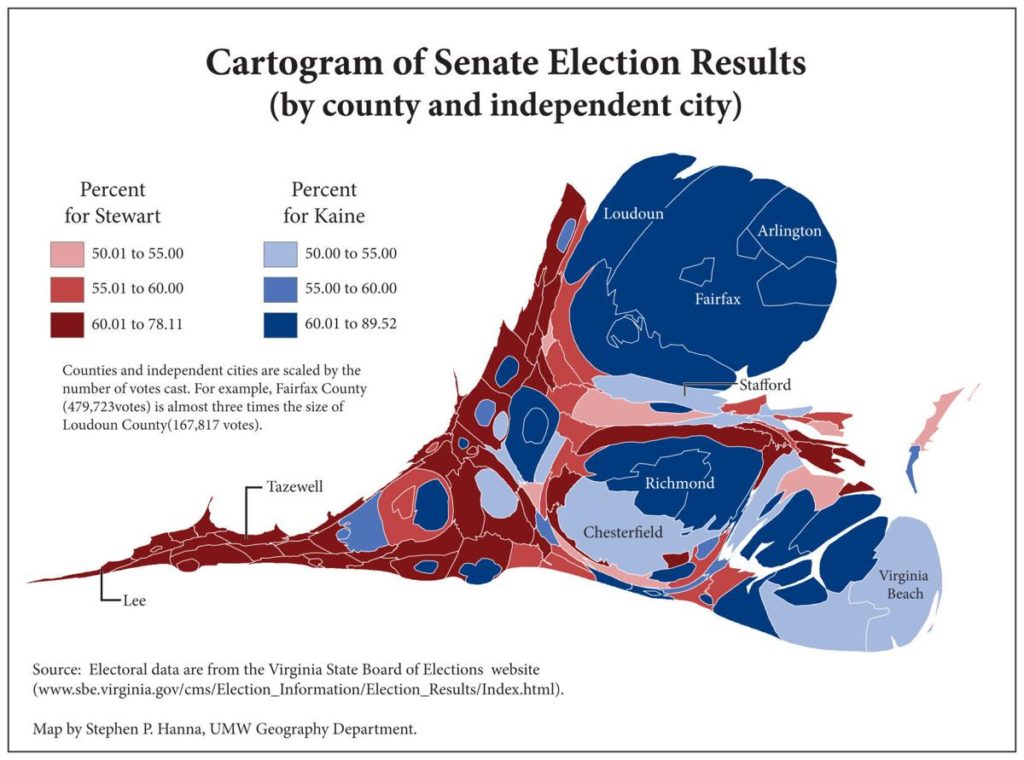 See where all the people are?  They’re rejecting the Republican Party en masse.

What’s to be done?  Calls from Republicans in deep blue territory to mimic Maryland won’t work.  Instructions that “rural Virginians” need to wise up and come along for the ride will not work either.

Remember that it was “rural Virginia” that gave the Republican Party leaders such as John Dalton (Emporia), Linwood Holton (Big Stone Gap), and Caldwell Butler (Roanoke) — places most northern Virginians could not find on a map.  Even George Allen (Charlottesville) and Jim Gilmore (Henrico — in a happier time) were all emissaries from rural Virginia to northern Virginia.

This is not to say that northern Virginia conservatives have nothing to offer.  Quite the contrary.  But the expectation that we should run Barry Goldwater in Fairfax County and expect victory is a touch outlandish.  Nor should we be satisfied with John McCain in places where conservatives can win decisively.

Rather, we have a three part problem.  Adults are walking away, youth are being driven out, and conservative values (as articulated today) simply aren’t speaking to the values in Virginia’s Golden Crescent.

The solution?  Clean house… and firmly reject the alt-right in our midst.  Stand firm on the rule of law, on our constitutional liberties, on the right to be left alone.  Focus on education reform for post-secondary institutions (our VCCS system, for instance) and create philosophers and welders.  Pave roads.  Develop the Port of Virginia into an international hub.

Above all else, start showing rural Virginia a little bit of respect.  Nothing galls us more than being instructed by a bunch of half-smart credentialed cubicle dwellers who claim to know what is in our interest, ship our industries and manufacturing overseas, rake in 8-10% profit while heading off for a craft beer while looking down on the now-unemployed as the America that was.

That’s how you get Trump.

The path forward is actually quite simple.  Want to recapture the suburbs?  Become a pro-education party again… and not just pro-public education, but give folks the opportunity to learn a trade (workforce development) and start a business (microfinance).

Rural Virginians are already miles ahead on this front… and if there is another Dalton, Holton, or Butler on the horizon?  Let the Valley, Southwest, and Southside (and the Tidewater) point the direction and lead the way.