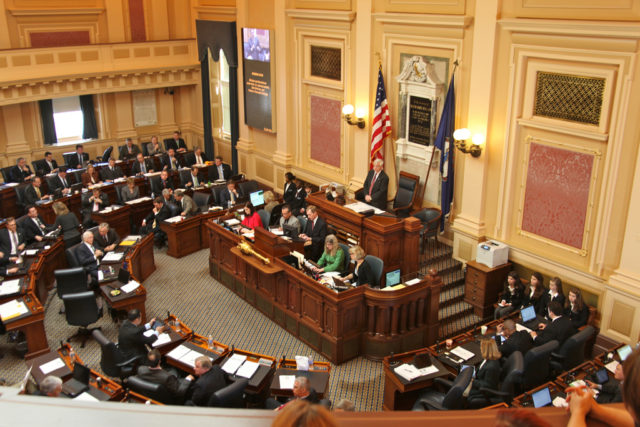 The Virginia House of Delegates just tipped back into the favor of Republicans after incumbent Del. David Yancey (R-Newport News) won the tie breaker in the 94th District against Democrat challenger Shelly Simonds to finish up the first election cycle since the presidential election in 2016. Although the bowl win creates a small but clear majority for Virginia Republicans, Simonds refused to concede the race decided in a draw from a bowl and might file accordingly for a second recount to be determined at a later date. However, unless a major disruption occurs at noon on January 10, Republican Majority Leader Del. Kirk Cox (R-Colonial Heights) is set to assume the role of Speaker of the House and lead his party into a difficult session with an all blue executive Virginia leadership. One issue that will undoubtedly be on the docket is Medicaid expansion.

In 2017, Virginia Republicans lost 15 seats in the House of Delegates, which some call a response to President Trump’s victory, and others call a response to establishment politicians. Nonetheless, Virginia’s conservative hold dropped from a massive 66-34 majority in the Virginia House to now teetering on the edge with a 51-49 Republican majority going into the 2018 General Assembly Session set to convene tomorrow at 12:00 p.m.

The former Democrat state senator from Virginia’s Eastern Shore and now Governor-elect Ralph Northam worked hard in the upper house as president of the Senate to push for Medicaid expansion for nearly 400,000 low-income Virginians. However, the Republican’s bleak majority will make it a bit harder for him to claim victory with his liberal policy points. During his gubernatorial campaign, Northam vowed to fight for Obamacare and expand Virginia’s Medicaid program to hundreds of thousands of low-income citizens. According to the campaign website of Ralph Northam:

“Virginians are already suffering from President Trump’s efforts to sabotage our health care — and in the coming months, thousands in our commonwealth are set to lose their health insurance. Health care is a right — and our leaders must stop playing political games and come together to build upon and improve the Affordable Care Act. That’s why I strongly support expanding Medicaid and ensuring that 400,000 Virginians have health care and why I have urged our leaders in Washington, D.C. to come together to improve and build on the Affordable Care Act — not gut it.”

Medicare expansion will undoubtedly bring in hundreds of millions of dollars to Virginia hospitals, but that will be at the cost of the taxpayer’s well-being. Just a few weeks ago, President Donald Trump signed into law the Tax Cut and Jobs Act which repealed the individual mandate under the ACA for the issuance of federal funds as medical insurance subsides. As reported by Freedom Works, according to the Joint Committee on Taxation, this reduces federal outlays by $318.4 billion due to the lack of a punitive tax to force people to pay into the system, thereby funding the plans of those who cannot afford healthcare insurance. Thus, decreasing the amount the federal government would have otherwise spent on tax credits for low-income citizens under the ACA.

While there are many in the media that claim the repeal will fictitiously result in the deaths of countless people, the inclusion of the repeal is a paramount political point. The importance of the repeal of the insurance mandate is twofold. First, health insurance reform will now have to be a commitment both Republicans and Democrats in Virginia’s upper and lower houses make in the 2018 Session to fix the decades-old problem. Secondly, this is a regressive tax. The Internal Revenue Service (IRS) concludes that almost 80 percent of American households that pay the tax as a penalty for not buying the many times unaffordable health insurance plans under the ACA earn under $50,000 of adjusted gross income. These are working families – working families that have been ignored for years. There are the American families in the low to middle income brackets who have proven they do not possess the means required to purchase Obamacare, even when given federal subsides.

Former DNC chairman and current Governor of the commonwealth Terry McAuliffe (D) and the then-supermajority of house Republicans have been locked in a fierce political battle since he took office in 2014 to whether or not follow the Obama Administration’s Medicaid expansion program under the Affordable Care Act (ACA). Virginia, along with 18 other states, refused to expand eligibility requirements for Medicaid as the ACA allows.

Republicans are not opposed to Medicaid expansion in Virginia. However, Governor McAuliffe’s plans would have blown a nearly seven billion-dollar hole in the state’s budget. Furthermore, there needs to be more dealing on the floor of Virginia’s House on Bank Street. If the Democrats want Medicaid expansion, give Republicans offshore drilling, or the ability to mine for Uranium and other precious metals in South Hill. Dealing means everyone can have something they want.

Although a Democratic win via the ceramic, creatively-painted bowl would not have guaranteed Medicaid expansion in the commonwealth, soon-to-be Speaker of the Virginia House of Delegates Kirk Cox (R-Colonial Heights) must keep his party in line so that two or three conservative party members do not move left-of-center and give Northam and the Democrats a clear victory for liberal policies. Even so, state senators are not due for reelection in 2019; therefore, Medicaid expansion will unlikely pass the Republican-held upper house which currently sits at a 21-19 split.