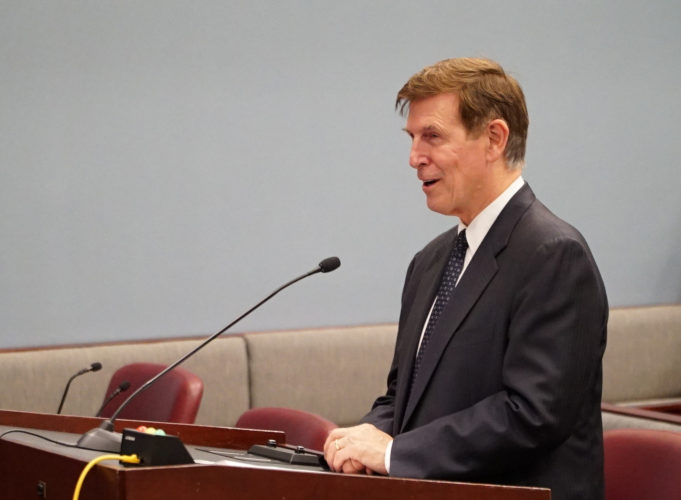 Democratic Congressman Don Beyer (VA-8) now has a Republican challenger for the 2018 midterm race after a young, hopeful candidate introduced himself to the Arlington County Republican Committee’s rank-and-file late last month. In February, Thomas Oh was the only Republican to file for the nomination, thus getting his first victory by clenching the nomination without a primary challenge.

The Republican nominee was raised in western Fairfax County, but he moved East into the 8th district in December.

“I look forward to the campaign,” said Thomas Oh during the February meeting. The 25-year-old Falls Church contractor and former Army veteran explained that he will vie for the seat in the House of Representatives by winning over millennials and Independent voters.

Thomas Oh said, “I think I can turn a lot of Democrats my way – I plan on going after Millennials.” In the 2016 and 2017 elections in Virginia, Republican picked up only around 30 percent of millennial voters.

Speaking to crowd of at least 50 people at the county’s Republican meeting, the nominee said, “Congress has failed us.” He is campaigning to represent as someone who is more in tune with the needs of the public and the production of a policy agenda that is both pragmatic and productive.

In a report from Inside NOVA, recently, previous challengers against Beyer did not fare well. In 2014, Micah Edmond picked up only 31 percent of the vote for the Republicans. In 2016, Republican nominee Charles Hernick only won over 27 percent of the district.
Nonetheless, Thomas Oh told the party’s leaders that he, “would give the campaign his all.”

Thomas Oh’s campaign is starting from scratch for fundraising while Beyer boasts a warchest of nearly $1 million.

As of now, there is no news of challenger for Beyer on the Democratic side. After the filing deadline is met at the end of the month, if no primary is needed, Beyer and Thomas Oh will face off in the Arlington County Civic Federation’s annual candidate forum in September.