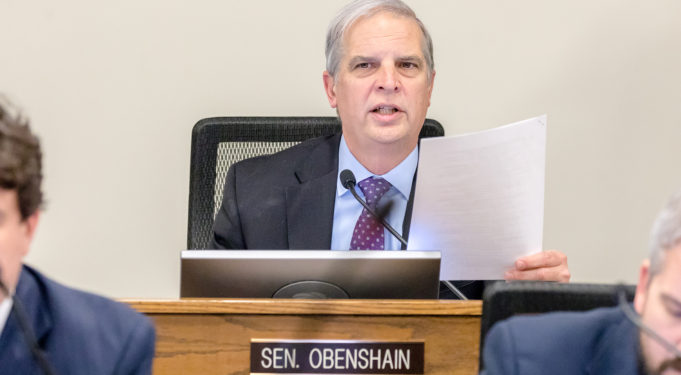 Prominent measures which were defeated included the “Red Flag” firearms confiscation bill, as well as an attempt to reinstitute the “One Handgun a Month” gun rationing law, previously repealed in 2012. Both of these measures received the strong support of Governor Northam.

Chaired by Senator Mark Obenshain (R-Rockingham), a strong Second Amement supporter from the Shenandoah Valley, the Senate’s Courts of Justice committee did not allow any restrictions on the Second Amendment to advance to the chamber floor.

The hearing opened to a packed room, including numerous gun control supporters affiliated with the anti-gun group Moms Demand Action, backed by former New York City Mayor Michael Bloomberg. As the evening wore on, gun control supporters left, though a lobbyist with the Virginia Citizens Defense League (VCDL) remained until the end.

Bob Sadtler, who works alongside VCDL President Philip Van Cleave, called the outcome “incremental progress”, but warned that numerous gun control bills still remained in the Senate as well as the House of Delegates.

“Some of the stuff is still alive,” Sadtler said, after the hearing. “We have a lot of work to do on lobby day,” referencing the group’s annual rally and grassroots lobbying push, scheduled for January 21st.

The Courts of Justice committee is scheduled to continue its work, including hearing gun-related bills, next Monday, at 8AM.

While not faring well in the Senate, Northam’s gun control push also faces an uphill climb in the House of Delegates. Last week, Delegate Terry Kilgore (R-Gate City) said the governor’s gun control agenda was “dead on arrival” in the lower chamber, predicting that none of Northam’s bills would advance to the House floor.

The bills defeated today include:

SB1008, introduced by Senator Adam Ebbin (D-Alexandria), which criminalizes the possession, sale, and transfer of trigger activators, bump stocks, and other devices which increase the firing rate of semiautomatic rifles.

SB1084, introduced by Senator David Marsden (D-Burke), which subjects gun owners to civil lawsuits if their firearm is stolen by a criminal. The bill would have required gun owners to “reasonably” secure their firearms, without defining the term, leaving interpretation open to the courts and plaintiffs’ attorneys.

SB1096, introduced by Senator Janet Howell (D-Reston), which creates a class 6 felony penalty for any gun owner who allows a person under age 18 access to a firearm, requiring all weapons be kept in secure, locked storage. The bill provides no exemption for self-defense, or where the minor has parental authorization to hunt or target shoot on private land.

SB1162, introduced by Senator Dick Saslaw, which criminalizes private party transfers and raises the age for firearm purchases from 18 to 21.

SB1324, introduced by Senator Jennifer McClellan (D-Richmond), which fines gun owners who do not report a stolen firearm within 24 hours.

SB1458, introduced by Senator George Barker (D-Fairfax), which allows confiscation of firearms without due process, also known as a “Red Flag” law. The bill provides only misdemeanor penalties for individuals making false statements against a gun owner, rather than the usual felony penalty for perjury found in all other legal proceedings.

SB1482, introduced by Senator Creigh Deeds, which prohibits the carrying of certain firearms in public in Albemarle County and the City of Charlottesville.

The committee also voted to advance one measure favored by gun owners.

SB1012, introduced by Senator Amanda Chase (R-Chesterfield), would allow firefighters and emergency medical services personnel to carry a concealed firearm, if such person previously served in law enforcement or the armed forces, and also had the permission of his or her fire chief or emergency medical services chief. Chase has introduced similar legislation in previous years.

The House of Delegates and the Senate will continue hearing legislation, including the remaining gun control bills, during the remainder of the session, scheduled to last until mid-February.

While gun rights advocates don’t expect any of the bills to pass this year, they did warn that Republicans control each chamber by the slimmest of margins — 51 to 49 in the House, and 21 to 19 in the Senate — opening the possibility of gun control being passed, should Republicans lose seats in the General Assembly during the elections in November, when all 140 lawmakers from both chambers are up for election.