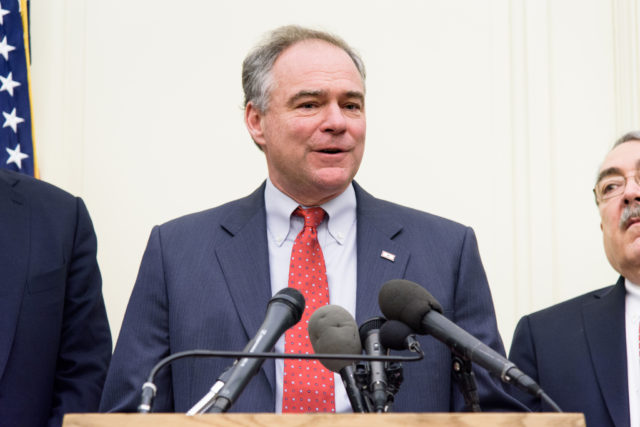 On Thursday night, the House voted in favor of a resolution to extend funding for the federal government to stop a shutdown that will commence at 12:01 tomorrow morning. Among the passed resolution is six years of funding to reauthorize the Children’s Health Insurance Program (CHIP). However, Senate Democrats, including Tim Kaine and Mark Warner of Virginia, are unwilling to sign on to the Republican measure and hold the children aided by CHIP and the government hostage.

The Virginia lawmakers have urged the Senate not to hold the government hostage and the children dependent on CHIP for their livelihoods. The aforementioned representatives released the following statement in regard to their support of CHIP, according to a press release from the office of Congressman Bob Goodlatte:

“Senate Democrats have a decision to make. Hold funding for the government hostage or take a vote to reauthorize CHIP and provide health coverage to nearly 9 million low-income children in the United States. We supported this legislation because we need to keep the government open and keep working on the American people’s priorities. Funding for Virginia’s CHIP program, known as FAMIS, is nearly exhausted and roughly 66,000 children and 1,100 pregnant women in the Commonwealth rely on this program to keep them healthy. Now isn’t the time for games of political brinksmanship. Shutting down the government does not accomplish the goal of funding CHIP or continuing important discussions in Washington. On behalf of the Virginia families we represent in Congress, we ask that the Senate act now to reauthorize CHIP. We hope Senator Schumer and his colleagues will join us in supporting the bill passed by the House tonight.”

In addition to funding for CHIP, the legislation delays the Cadillac Tax and the Medical Device Tax for two years and suspends the Health Insurance Tax for 2019. Though, the media has failed to report on the fact that House Republicans have also passed all twelve subsequent appropriations for Fiscal Year (FY) 2018 – the Senate failing to pass any of them.

In a report from The Hill, Both Virginia Senators Tim Kaine and Mark Warner are going to vote against the House bill. “We oppose the House Continuing Resolution,” according to a statement. Kaine and Warner have long been opposed to anything set in the Republican agenda that favors less-affluent Americans. They even come forward to voice their distaste for bipartisan legislation passed by the House that gives funding to CHIP, as well as numerous vital programs for FY 2018.

Senate Democrats are adamant that any stopgap funding measure aimed at avoiding a government shutdown at midnight must include protections for children protected under the Deferred Action for Childhood Arrivals Act (DACA). Therefore, it seems that liberal Dems are willing to hold the fate of the health and welfare of children aided under CHIP over an unrelated bill that can be taken up before DACA expires in March. The Senate Democrats, including both Kaine and Warner, are going to let their fierce opposition to the president harm the children under CHIP if they vote no today.