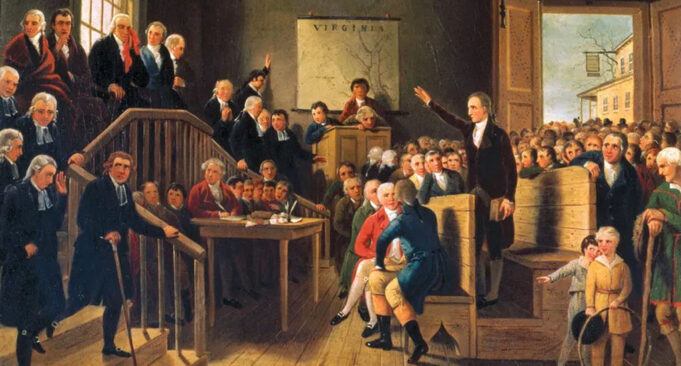 Reading the pages of The Atlantic this morning, David Frum opines that the Republican Party has two choices before it.

Simply put, Republicans can either retrench into Trumpism or they can become more like Democrats — or as Frum puts it, become “more secular, more diverse, more accepting of female leadership” — which seems like odd advice from a party that just finished eviscerating Justice Amy Coney Barrett for the better part of a month.

With the death of Virginia’s mainstream media, the opinion columns have by and large moved online. Most of them have chimed in with varying degrees of value, but a quick summary will run as follows:

Lowell Feld over at the Democratic flagship Blue Virginia prognosticates that Democrats enjoy the latitude for infighting moving into 2021 while Republicans continue to be in a three-way civil war (one of whose factions actually uses Civil War imagery).

The inestimable James A. Bacon who shepherds what has to be one of the more informative bastions of intellectual policy thought in Virginia observes that the polarization of power in Virginia is much larger than Trump. With Democrats holding every statewide office, the question at large is whether Republicans (and specifically conservatives) can still muster a challenge?

Once the mainstay of conservative thought and opinion in Virginia, the old flagship of Bearing Drift seems to enjoy more left-of-center commentators than conservatives ones. Former Republican Delegate Chris Saxman bemoans the current state of affairs on Grace Street; Steve Brodie Tucker writes on how the Republican Party is irreparably damaged and calls for a third party; D.J. McGuire — formerly a hard nosed anti-Communist until recently and now a hard nosed progressive Democrat — points towards what moves behind the curtain — an effort to build a third party.

This does not make their erstwhile rivals at The Bull Elephant any more friendly, as their flirtation as the mouthpiece of the the alt-right in Virginia dithers from embarrassing to absolutely outrageous at any given moment.

Cathy McNickle writes on how the strategy of terror oscillating between COVID and BLM/Antifa worked to grind down Republicans who otherwise might have re-elected Trump in a landslide. Mark Jaworowski wonders aloud on how the alt-right can be coalesced into a wider coalition of “smart right” leadership with alt-right energy.

Yes, these voices actually exist in the Republican Party of Virginia.

Newcomer Kerry Dougherty (formerly of the Virginan Pilot) and Brian Kirwin respectively have not chimed in with their prognostications, though Dougherty sure does wag a finger towards the Biden campaign for being sore winners.

Last but not least, Robert Zullo with the left-leaning (and dark money funded) Virginia Mercury has some basic and well-intended truths to lay on the table, namely the nature and feature of that all encompassing term: GRIFT.

For example, the Republican Party of Virginia launched an “election integrity fund” in attempt to siphon more money out of its voters ostensibly on behalf of the guy who has helped lose the Virginia GOP every statewide election, control of the General Assembly and three House of Representative seats since he took office.

Needless to say, I think we can distill the wisdom of the blogerati as such:

Virginia Republicans simply aren’t tacking into this headwind well, if at all.

Typically in any sort of After Action Report, you have four considerations: objectives, results, pathways, and goals.

The objective and the result should be self-evident at this rate. The pathways — our processes, causes, what-happened, what worked, what broke apart, and most importantly why — are where we have been stuck since the Jeff Frederick era.

Everyone knows what is broken; no one wants to fix it.

As it stands now, the Republican Party of Virginia is about to engage in a five-way civil war of its own — and the winner take what few spoils remain.

This is not to say that anyone who hails from one of these camps is 100% on board in each. Some candidates will be able to unite the various camps.

Rare candidates will be able to unite them all (one thinks of Jim Gilmore’s campaign for governor in 1997 as an example of such quality).

The great task of Rich Anderson as chairman of the Republican Party of Virginia is to get all these camps to work together against a wider opposition, one where all the voices get a seat at the table in any future majority/administration and where all five camps (and various candidates) believe the nomination contest was adjudicated fairly, evenly, and without bias or pressure.

The larger point is that — unlike the emotional attachment Democrats gave to Obama and Clinton — the left misses the fact that most Republicans viewed Trump as a vehicle for ideas, not as a cause unto himself.

That Republicans are not burning down our cities or behaving like BLM/Antifa shocks most observers on the left who were hoping for a similar temper tantrum.

But we have to be considerate moving forward that we will require candidates and qualities that remain sensitive to the idea that we will only recapture majorities and statewide offices in Virginia by speaking the languages, hopes and fears of the broader Republican coalition in Virginia — which means we go back into the suburbs, find our inner Jack Kemp, and start presenting an alternative to socialism that is uniquely American.

Above all else? Republicans need to start deeply considering whether our party infrastructure requires an update. If the RPV Advance actually comes off this year (and I think it will), the presentation of an After Action Report with recommendations to State Central on how it can effectively reform into a membership-driven party is critical.