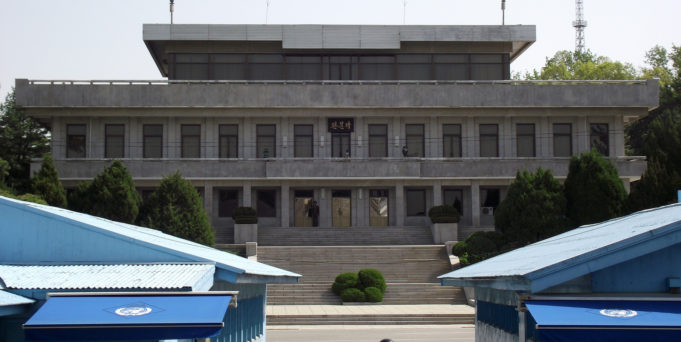 As the leaders of the two Koreas spent a full day with each other in Panmunjom in substantive conversation, it was the height of good feelings after 73 years apart and at each other’s throats. Although there has been enough horrific civil war and international conflict within that time to fill centuries worth of fighting, when North Korea’s Kim Jong Un and South Korea’s Moon Jae-In called to, “open up a new era of peace” and ultimately end the Korean War, it is natural that optimism will reign supreme, along with sighs of relief.

President Donald Trump added his commentary on Twitter shortly after the end of the summit in Panmunjom.

“KOREAN WAR TO END! The United States, and all of its GREAT people, should be very proud of what is now taking place in Korea!”

Just the sight of the North Korean dictator walking across the DMZ to meet his South Korean counterpart is a stunning revelation. Moreover, it is a massive step in the right direction for the entire world.

The move signals that the authoritarian regime is becoming less belligerent, in part because of two things.

First, China has made it clear to North Korea that their nuclear proliferation and missile testing provocations are damaging the world economy, thus hurting China. Therefore, Jong-Un must now understand that if he does not cease his missile-laden hissy-fits, China will hurt him – whether that be with military force, tariffs, or cutting off their energy supplies.

Second, Trump has shown the North Koreans, and indeed the world, that he, unlike President Obama, might actually relish in lobbing a hundred or so Tomahawk missiles at Pyongyang.

So, there is no doubt that the meeting and renewed actions from the North Korean leader is grounds for a feeling of worldwide optimism. However, the world must not ignore the many hurdles that will need to be navigated to proclaim peace on the Korean Peninsula.

In 1972, the two Koreas started a negotiation process, the goals of which were very similar to those said to be a part of the Panmunjom Declaration.

In 1991, both nations jointly pledged to establish a “peace regime” that would led to a full end to the Korean War. Though, that agreement failed after North and South Korea nearly went to the brink of conflict in the mid-1990s as the North’s nuclear program was a topic of contention.

Nearly every provision in the new declaration has been worked into failure in the past and North Korea seemingly has the power to set the tone and pace of progress with vague promises to denuclearize and promises to link the two Koreas via rail infrastructure.

Obviously, the Demilitarized Zone must be taken care of as one of the first steps to a peace agreement. As well, as a CNN editorial states, the lesser-known Northern Limit Line in the Yellow Sea have remained real trigger points for inter-Korean clashes that will ultimately need to be integrated into the peace deal.

Meanwhile, the U.S. and China, who fought against one another in the proxy war in the 1950s are still against one another. Although Seoul and Pyongyang have renewed feelings towards one another, for full peace to occur, should Trump and Chinese President Xi Jinping be a part of the deal? After all, the Korean Armistice Agreement involved both parties and should be updated, altered, or thrown out to signal the end of the Korean War.

Furthermore, will Japan play a role in the agreement? They will undoubtedly be an economic player in the game, but is also a key U.S. ally. They could feel left out if the two Koreas begin to come closer to one another.

As well, if Trump potentially signals a troop withdrawal from South Korea, the U.S. cannot lessen its foothold in the Eastern Hemisphere. The U.S. must keep a strong presence against China. Therefore, there would be pressure to expand military bases in Okinawa and elsewhere in Japan – probably not the least sensitive issue.

Even though the Soviet Union was never a part of the 1953 Armistice, Russia has been a key player with North Korea’s foreign relations and also has significant leverage due to its transportation and coal exports to the country. So, should Vladimir Putin have a seat the a growing table?

Even if all of this is figured out in the near future, the world also must still come to terms with another thing – Jong-Un is a brutal, murderous dictator. Would the Panmunjom Declaration include an end to the extensive gulags, prison systems, hard labor farms, brainwashing of citizens, and countless other things the dictator uses to consolidate his power?

Would he even consider such a thing?

If he didn’t, would there be a regime change?

Would there be war?

A meeting between Jong-Un and Moon in Panmunjom may signal the beginning to the end of the Korean War; however, for a full integration of a peace agreement there is still a long way to go.